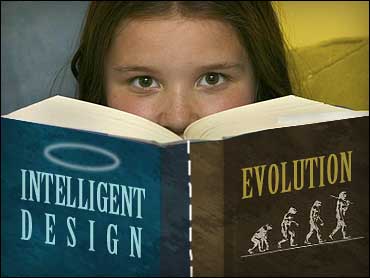 Evolution prevailed over "intelligent design" in a courtroom contest of survival of the fittest.

In a remarkably stinging decision, a federal judge ruled Tuesday that intelligent design is not science but religion in disguise, and he barred a Pennsylvania public school district from teaching the concept to high school biology students.

The ruling was a major setback for the intelligent design movement, which holds that living organisms are so complex that they must have been created by some kind of higher force.

The case was one of the biggest courtroom clashes between faith and evolution since the 1925 Scopes Monkey Trial.

U.S. District Judge John E. Jones III came down firmly on the side of evolution, delivering a stern rebuke to the Dover school board. He said its first-in-the-nation decision in October 2004 to insert intelligent design into the science curriculum violated the constitutional separation of church and state.

He decried the "breathtaking inanity" of the policy and accused several board members of lying to conceal their true motive, which he said was to promote religion.

A six-week trial over the issue yielded "overwhelming evidence" establishing that intelligent design "is a religious view, a mere re-labeling of creationism, and not a scientific theory," said Jones, a Republican and a churchgoer appointed to the federal bench three years ago.

Adopted in October 2004, the policy was believed to have been the first of its kind in the nation, reports CBS News correspondent Barry Bagnato. "Clearly what the judge has said here is going to have ramifications all over the country, where intelligent design is a controversy," Bagnato reports.

Dover is a small town in rural Pennsylvania. Mostly white, mostly Christian, mostly conservative, CBS News correspondent Jim Axelrod reports. But, the school system said it will probably not appeal the ruling, because several members who backed intelligent design were ousted in November's elections and replaced with a new slate opposed to the policy.

During the trial, the board argued that it was trying to improve science education by exposing students to alternatives to Charles Darwin's theory of evolution and natural selection.

The policy required students to hear a statement about intelligent design before ninth-grade lessons on evolution. The statement said Darwin's theory is "not a fact" and has inexplicable "gaps." It referred students to an intelligent-design textbook, "Of Pandas and People."

But the judge said: "We find that the secular purposes claimed by the board amount to a pretext for the board's real purpose, which was to promote religion in the public school classroom."

"This doesn't end the case," says CBSNews.com Legal Analyst Andrew Cohen. "We almost certainly will see an appeal here and the ruling doesn't prevent any other school board in any other jurisdiction from trying to get Intelligent Design into public classrooms. But clearly this ruling is a sign that those efforts will not get any easier."

Eric Rothschild, an attorney for the families who challenged the policy, called the ruling "a real vindication for the parents who had the courage to stand up and say there was something wrong in their school district."

Richard Thompson, president and chief counsel of the Thomas More Law Center in Ann Arbor, Mich., which represented the school district and describes its mission as defending the religious freedom of Christians, said the ruling appears to be "an ad hominem attack on scientists who happen to believe in God."

It was the latest chapter in a debate over the teaching of evolution dating back to the Scopes trial, in which Tennessee biology teacher John T. Scopes was fined $100 for violating a state law against teaching evolution.

Earlier this month, a federal appeals court in Georgia heard arguments over whether a suburban Atlanta school district had the right to put stickers on biology textbooks describing evolution as a theory, not fact. A federal judge last January ordered the stickers removed.

In November, state education officials in Kansas adopted new classroom science standards that call the theory of evolution into question.

President Bush also weighed in on the issue of intelligent design recently, saying schools should present the concept when teaching about the origins of life.

In his ruling, Jones said that while intelligent design, or ID, arguments "may be true, a proposition on which the court takes no position, ID is not science." Among other things, he said intelligent design "violates the centuries-old ground rules of science by invoking and permitting supernatural causation"; it relies on "flawed and illogical" arguments; and its attacks on evolution "have been refuted by the scientific community."

"The students, parents, and teachers of the Dover Area School District deserved better than to be dragged into this legal maelstrom, with its resulting utter waste of monetary and personal resources," he wrote.

The judge also said: "It is ironic that several of these individuals, who so staunchly and proudly touted their religious convictions in public, would time and again lie to cover their tracks and disguise the real purpose behind the ID Policy."

Former school board member William Buckingham, who advanced the policy, said from his new home in Mount Airy, N.C., that he still feels the board did the right thing.

"I'm still waiting for a judge or anyone to show me anywhere in the Constitution where there's a separation of church and state," he said. "We didn't lose; we were robbed."

The controversy divided Dover and surrounding Dover Township, a rural area of nearly 20,000 residents about 20 miles south of Harrisburg. It galvanized voters to oust school board members who supported the policy in the Nov. 8 school board election.

The new school board president, Bernadette Reinking, said the board intends to remove intelligent design from the science curriculum and place it in an elective social studies class. "As far as I can tell you, there is no intent to appeal," she said.