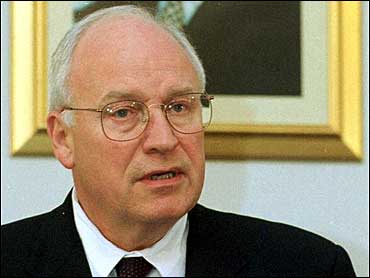 U.S. District Judge John Bates said the case filed by Comptroller General David Walker against the vice president is an unprecedented act that raises serious separation-of-powers issues between the executive and legislative branches of government.

"No court has ever before granted what the comptroller general seeks," wrote Bates, an appointee of President Bush.

The judge said that the comptroller general, who runs the General Accounting Office, "does not have the personal, concrete and particularized injury required" under the Constitution and that "his complaint must be dismissed."

Courts historically have not stepped in to resolve disputes between the political branches, wrote Bates.

"This case, in which neither a House of Congress nor any congressional committee has issued a subpoena for the disputed information or authorized this suit, is not the setting for such unprecedented judicial action," wrote the judge.

The General Accounting Office wanted to require the administration to identify the executives, including some from now-collapsed Enron, who met last year with Cheney's energy task force.

Mr. Bush has refused to hand over the documents, saying to do so would encroach on his ability to get outside views.

The White House also argued that the GAO overstepped its authority by asking the vice president for information on the task force.

The dispute began last April but gained political traction once Enron, entered into bankruptcy on Dec. 2.

The lawsuit names only Cheney as defendant, but both as vice president and as chairman of the task force.

The lawsuit is the GAO's first against part of the federal government to get documents it wants.

The GAO has forced a showdown with the executive branch in disputes over gathering information just four other times in the past 21 years. In two of those instances, the incumbent administration supplied the information.

In the other two, the administration filed certification letters saying turning over the information could "substantially impair" government operations. That letter keeps the information private.

The White House and the GAO have not tried to negotiate a settlement since Walker on Jan. 30 said he would go forward with the lawsuit.

GAO officials say, however, they are not seeking notes, minutes, transcripts or records of meetings from the vice president or the energy task force. Instead, Walker offered in July to scale back the request to only names of people involved and the subject and cost of each meeting, GAO officials said.

The White House has provided the agency information relating to direct and indirect costs of the energy task force, the official said.

Democratic Reps. Henry Waxman of California and John Dingell of Michigan requested information in the spring of 2001 about which industry executives and lobbyists the Cheney task force was meeting with in formulating the Bush administration's energy plan.

The Cheney energy plan called for expanded oil and gas drilling on public land and easing regulatory barriers to building nuclear power plants. Among the proposals: Drilling in the Arctic wildlife refuge and possibly reviving nuclear fuel reprocessing, which was abandoned in the 1970s as a nuclear proliferation threat.