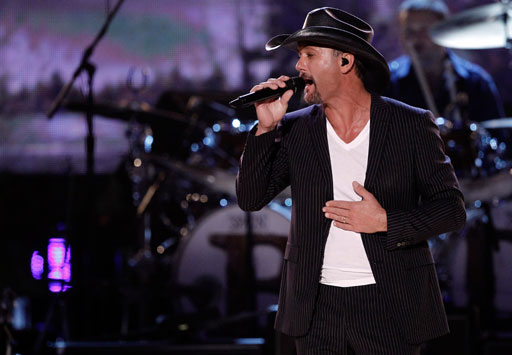 (CBS/AP) NASHVILLE, Tenn. - Country music star Tim McGraw won a court ruling Wednesday allowing him to keep recording during adjudication of a lawsuit against him by Curb Records.

Chancellor Russell Perkins ruled Wednesday after a four-hour hearing that McGraw can sign with another record label and record new music.

Pictures: A star for Tim McGraw

Curb Records sought to prevent the 44-year-old McGraw from recording or signing with another label until he fulfilled what Curb believed was his obligation for a fifth album.

The three-time Grammy winner is accused of breach of contract, and that trial is scheduled for July.

The performer and singer Faith Hill, his wife, were in court Wednesday. McGraw did not testify.

After the ruling, McGraw shook his attorneys' hands and said he was "just very happy."

His attorneys argued that Curb is trying to put his career on hold. He's been under contract with Curb since 1997.

At issue is the timing of McGraw's unreleased album "Emotional Traffic," which Curb says was delivered too early. McGraw countersued on grounds his career was being stymied. If it is released, "Emotional Traffic" will be McGraw's 11th studio album.

Additionally, his attorneys argued in court that he delivered one of his best albums yet. One of the songs on the album, "Felt Good on My Lips," has already been released by Curb and has become a hit.