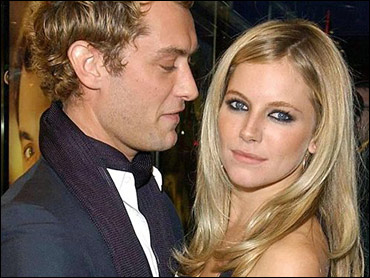 Jude Law publicly apologized to his fiancee, actress Sienna Miller, expressing his "sincere regret" over an affair with one of his children's nanny.

"Following the reports in today's papers, I just want to say I am deeply ashamed and upset that I've hurt Sienna and the people most close to us," the 32-year-old actor said in a statement Monday to the British Press Association.

"I want to publicly apologize to Sienna and our respective families for the pain that I have caused," said Law, star of "Alfie" and "The Talented Mr. Ripley" films.

The publicity firm that represents Miller told The Associated Press the 23-year-old actress had no comment on Law's statement.

Miller was Law's co-star in the remake of "Alfie." The couple became engaged on Christmas Day 2004.

The nanny was identified as Daisy Wright, 26.

The actor earned Oscar nominations for his roles in "The Talented Mr. Ripley" and "Cold Mountain." His screen credits also include "Sky Captain and the World of Tomorrow," "Closer" and "The Aviator," all released in 2004.