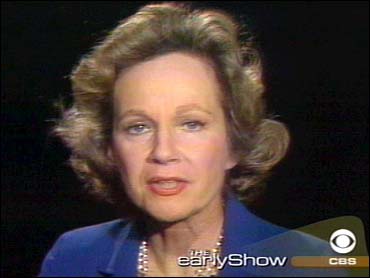 Trailblazing journalist and author Shana Alexander, whose on-air verbal skirmishes with conservative James J. Kilpatrick on CBS' "60 Minutes" were so popular they were spoofed on "Saturday Night Live," died Thursday of cancer, her family confirmed. She was 79.

But she was best known for her "Point-Counterpoint" segments with Kilpatrick at the end of each "60 Minutes" broadcast in the late 1970s.

"She was one of the first female journalists to become a big-time name in television journalism, when women were few and far between," the show's founding executive producer, Don Hewitt, told The Associated Press Thursday night.

"She was one of the people who got '60 Minutes' off the ground in the early days," Hewitt added. "The 'Point-Counterpoint' piece was extremely popular."

It was so popular that it was frequently parodied on the "Saturday Night Live" Weekend Update segment, with Jane Curtin in the liberal Alexander role and Dan Aykroyd in the Kilpatrick role, typically beginning his rebuttal with the curt and crude: "Jane, you ignorant slut."

Alexander reported on some of the biggest news stories of her time, writing extensively about the early days of the women's rights movement, the battle over abortion, President Nixon's handling of the Vietnam War, and the massacre of Israeli athletes at the 1972 Olympics in Munich, Germany.

She also wrote a number of nonfiction books, including "Anyone's Daughter," a biography of kidnapped heiress Patricia Hearst. Her book "Nutcracker," about Frances Schreuder, the New York socialite who persuaded her son to kill her millionaire father, was made into a 1987 miniseries.

Her article about a suicide hot line worker's efforts to keep a caller from killing herself was turned into the 1965 film "The Slender Thread," starring Sidney Poitier and Anne Bancroft.

Writing came naturally to Alexander, whose mother, Cecilia, was a film critic for the magazine that later became "Variety." Her father, Milton Ager, was a songwriter whose credits included "Happy Days are Here Again," which for decades was played at Democratic party gatherings. He also wrote "Ain't She Sweet."

Besides her niece, Alexander is survived by her sister Laurel Bentley. Her daughter, Katherine Alexander, died in 1987 when she jumped from the window of the apartment she shared with her mother.