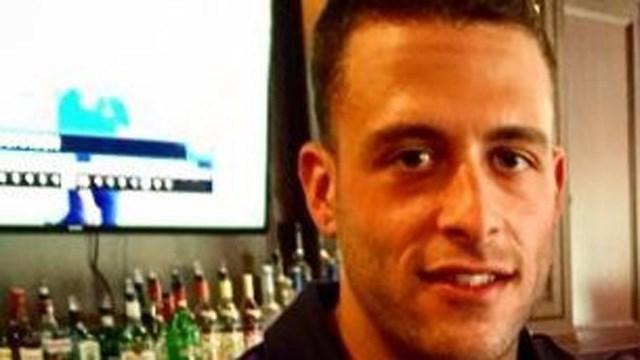 NEW YORK -- One of the defendants charged in connection with the stabbing death of a Connecticut man last seen at a New York City apartment party led investigators to the man’s body buried in a shallow grave in New Jersey, according to a criminal complaint released by the Manhattan District Attorney’s office.

James Rackover, 25, of New York City, and Lawrence Dilione, 28, of Jersey City, N.J., were arrested Thursday on charges that initially included murder. But they were arraigned only on charges of concealing a corpse, tampering with evidence and hindering prosecution in the death of 26-year-old Joseph Comunale.

Nonetheless, during the hearing late Thursday, Assistant District Attorney Antoinette Carter alleged that “one or both of these people committed a murder.”

Comunale, a 26-year-old Hofstra University graduate who lives in Stamford, Conn., had gone to a club in New York City with friends Saturday night. He was last seen entering the Grand Sutton building in Manhattan on Sunday morning with three men and three women he had just met that night, according to Chief of Detectives Robert Boyce. Rackover lives in an apartment in the upscale complex, according to court documents.

The criminal complaint says Dilione told investigators he knows Rackover and went to a party at Rackover’s apartment with “Joey.” He allegedly said, “We took Joey’s body to Oceanport, New Jersey and we buried it in a vacant lot.” Dilione then allegedly showed investigators the location on an online map, where crews discovered a body believed to be Comunale in a shallow grave. Officials say he had been stabbed 15 times and the remains had been partially burned.

The complaint also cites an unidentified witness who saw Rackover allegedly placing a large duffel bag into the trunk of a black vehicle with tinted windows on Nov. 13.

The complaint details how investigators tracked a car traveling to New Jersey the same night and back to Manhattan early Nov. 14. Surveillance images captured Rackover driving what appeared to be a black Mercedes into a garage nearby his apartment building, parking and leaving the garage.

The complaint says a black 2015 Mercedes Benz is registered to Jeffrey Rackover, who also lives in the complex, but in a different apartment. James Rackover told investigators Jeffrey is his father. A family friend told CBS New York that Jeffrey Rackover, a celebrity jeweler whose clients reportedly include Melania Trump, adopted the younger Rackover.

The 25-year-old reportedly has a criminal history in Florida which includes burglary and drug charges.

“The kid came from Florida, he was a troubled kid,” the family friend, Bo Deitl, told CBS New York. “He was in trouble a few times and Jeffrey took him under his wing, helped him to find a real good job.”

The younger Rackover’s lawyer told CBS News his client changed his name from James Beaudoin to James Rackover with Jeffrey Rackover’s assistance, but didn’t know whether the jeweler had adopted him.

The lawyer, Maurice Sercarz, has said the case has “serious problems” and will be “vigorously” contested. He told CBS News the two defendants were initially booked for second-degree murder, but those charges were “mysteriously” missing from the criminal complaint. He believes prosecutors do not have enough evidence to charge his client with murder.

“It’s only the beginning for us and I look forward to what our review of the evidence will reveal,” Sercarz told reporters.

The Manhattan District Attorney’s Office forwarded CBS News the complaint that did not include murder charges, but didn’t respond to a request for more information about why those were not being pursued.

According to the complaint, James Rackover told investigators he hosted a party in his apartment that was attended by several people including his acquaintance Dilione, a few young women and a man he didn’t know. He said he didn’t know what happened to the man who attended the party.

The station reports investigators believe Comunale was stabbed multiple times in the chest inside an apartment in the Manhattan complex. The victim also suffered a broken pelvis and detectives believe his body may have been tossed from a window.

Police first responded to the scene when someone called 911 to report a suspicious man leaving the building dragging a large bag, CBS New York reported.

Boyce said the victim’s bloodied clothing, sheets and towels were found in plastic bags that had been thrown down the building’s garbage chute. Boyce said detectives discovered bleach and say it was likely used in an attempt to remove blood from the clothing. Investigators also found “noticeable” blood spatter in the home.

Boyce said Rackover has requested a lawyer and is not cooperating with investigators. Investigators were questioning several people including the other men and women who were at the party. Sources tell CBS New York investigators suspect a third person may have also been involved.

“He was loved by everybody, he had hundreds of friends, he didn’t deserve this,” the victim’s father, Pat Comunale, told reporters.