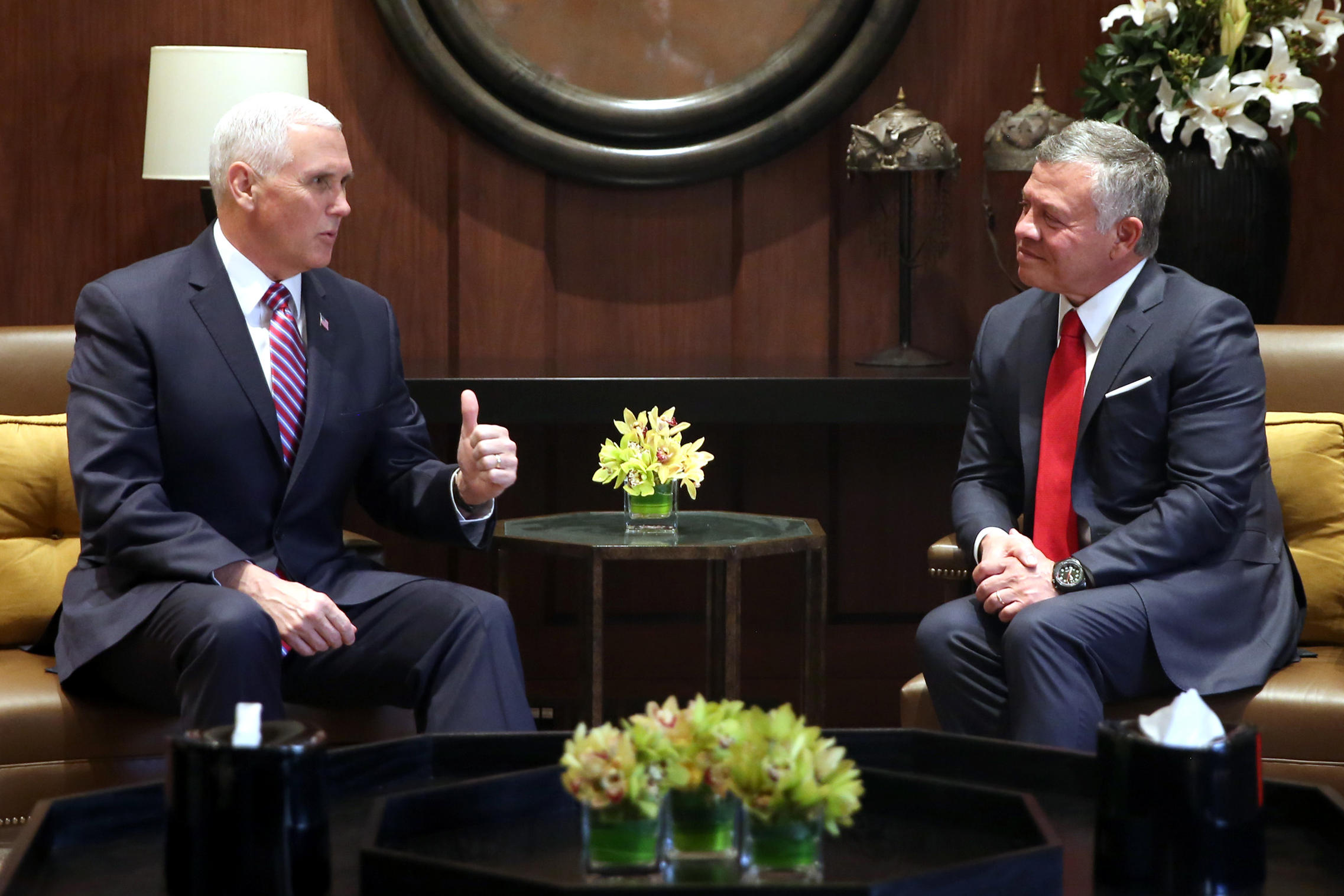 Jordan's king appealed Sunday to U.S. Vice President Mike Pence to "rebuild trust and confidence" in the possibility of a two-state solution to the Israeli-Palestinian conflict, following fallout from the Trump administration's decision to recognize Jerusalem as Israel's capital.

Pence, in turn, tried to reassure the monarch that the Trump administration remains committed to restarting Israeli-Palestinian peace efforts and views Jordan as a central player.

The vice president also said that "the United States of America remains committed, if the parties agree, to a two state solution." Such a caveat deviates from long-standing U.S. support for a two-state solution as the only possible outcome of any peace deal.

President Trump's pivot on Jerusalem last month infuriated the Palestinians, who seek the Israeli-annexed eastern sector of the city as a future capital. They accused the U.S. of siding with Israel and said Washington can no longer serve as a mediator.

Jerusalem is the emotional centerpiece of the long-running conflict, and Mr. Trump's policy shift set off protests and condemnation across Arab and Muslim countries.

It posed a dilemma for Abdullah, who is a staunch U.S. ally, but also derives his political legitimacy in large part from the Hashemite dynasty's role as guardian of a key Muslim site in Jerusalem. Any perceived threat to Muslim claims in the city is seen as a challenge to Jordan, where a large segment of the population is of Palestinian origin.

Pence told Jordan's monarch on Sunday that Mr. Trump made it clear in his announcement on Jerusalem "that we are committed to continue to respect Jordan's role as the custodian of holy sites, that we take no position on boundaries and final status."

He said Jordan would continue to play a central role in any future peace efforts.

The vice president also praised Jordan's contribution to a U.S.-led military campaign against Islamic State extremists who in recent months were pushed back from large areas in Iraq and Syria, both neighbors of Jordan.

Abdullah expressed concerns about the regional fallout from the Jerusalem decision.

"Today we have a major challenge to overcome, especially with some of the rising frustrations," he said. He described the Pence visit as a mission "to rebuild trust and confidence" in getting to a two-state solution, in which a state of Palestine would be established in the West Bank, Gaza Strip and east Jerusalem, lands Israel captured in 1967.

Another cause of concern for Jordan is the Trump administration's decision to move the U.S. Embassy in Israel from Tel Aviv to Jerusalem. Jordan vehemently opposes such a move if taken ahead of an Israeli-Palestinian partition deal.

A longstanding international consensus holds that the city's final status should be decided through negotiations, which was also U.S. policy going back decades.

Palestinian President Mahmoud Abbas said he would not meet with Trump administration officials and called off a meeting with Pence that had been scheduled for mid-December.

In a new expression of that snub, Abbas overlapped with Pence in Jordan from Saturday evening to midday Sunday, when the Palestinian leader flew to Brussels for a meeting with EU foreign ministers Monday. There, Abbas is expected to urge EU member states to recognize a state of Palestine in the pre-1967 lines, and to step up involvement in mediation.

Nabil Abu Rdeneh, an Abbas adviser, reiterated Sunday that "the U.S. is no longer acceptable as a mediator."

"Any plan from any side should be based on the basic references, which are the U.N. resolutions on the establishment of a Palestinian state on the borders of 1967, with east Jerusalem as a capital, and the Arab Peace Initiative, which addresses many issues, including the issue of refugees," he said.

"Any plan that is not based on the international legitimacy and the Arab Peace Initiative will not be acceptable, neither by the Palestinians nor the Arabs."

Pence also met with U.S. troops in the region on Sunday along with his wife Karen. He spoke with members of the 332d Air Expeditionary Wing whose goal is to counter ISIS.

The unit Pence visited with has delivered 46% of the ammunitions in Operation Inherent Resolve. He delivered high praise from Mr. Trump on their efforts to defeat ISIS, saying the administration promises to restore the might of the U.S. military.

"We're fighting for you every day, because we know you're fighting in this frontier  for the safety and security of the American people," said Pence in his remarks. He added, "Thanks to your heroic actions, ISIS has been crushed, their so-called caliphate has fallen and crumbled."

He also brought up the government shutdown currently taking place back home in Washington, saying he was confident the administration was "going to get this fixed."

"The minority in the Senate decided to play politic with military pay, you deserve better," he told the troops. He added, "You shouldn't have to worry one minute about if your'e going to be paid."

Pence is expected to later depart for Israel, where he's scheduled to hold meetings with Israeli Prime Minister Benjamin Netanyahu, deliver an address to the Knesset and visit the Yad Vashem Holocaust memorial.