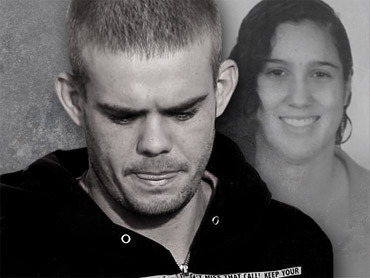 LIMA, Peru (CBS/AP) Joran van der Sloot slammed Stephany Flores in the face with his right elbow, strangled the 21-year-old Lima woman for a full minute, then took off his shirt and suffocated her with it, according to transcripts of his signed confession released by Peruvian authorities.

"There was blood everywhere," the Dutch national said according to transcripts obtained by CNN. "What am I going to do now? I had blood on my shirt. There was also blood on the bed, so, I took my shirt and put it on her face, pressing hard, until I killed Stephany."

On Friday, a judge ordered him jailed on first-degree murder and robbery charges in Flores' May 30 slaying.

In the transcribed confession, obtained by CNN and The Associated Press, he says Flores threw the first blow.

"At that moment impulsively, with my right elbow I hit her in the face exactly on top of the nose," van der Sloot said in transcripts according to CNN. "I think she started to faint. It affected me so that I grabbed her from the neck and strangled her for a minute."

The two were playing online poker on his laptop, said van der Sloot, when an insulting message arrived on the screen mentioning the Natalee Holloway case and saying, "I'm going to kill you, you little Mongoloid."

Van der Sloot has been arrested twice but has never been charged in the 2005 disappearance of the American teen, who vanished while on vacation in Aruba.

He said that after he explained the Holloway disappearance and how he'd been accused of it, Flores punched him on the left side of his head.

There is no mention in the confession about Flores and van der Sloot having sexual relations. Police say there is no evidence of sexual abuse.

Peru's criminal police chief, Gen. Cesar Guardia, says he's skeptical about van der Sloot's story. The defendant is, after all, a person who described himself as "a pathological liar" in a 2007 book he co-wrote when several of the figures in the Holloway saga cashed in on the case with published accounts.

"I lost control of my actions," the confession quotes him as saying. "I didn't know what I was doing."

Van der Sloot's attorney, Maximo Altez, said Thursday that his client's confession was void on the grounds that he made it in the presence of a defense lawyer who was appointed by police.

Guardia disagrees, saying that not only was van der Sloot properly represented by his government-appointed defense attorney, but the Dutch translator present during the interrogation was assigned by the Dutch Embassy.