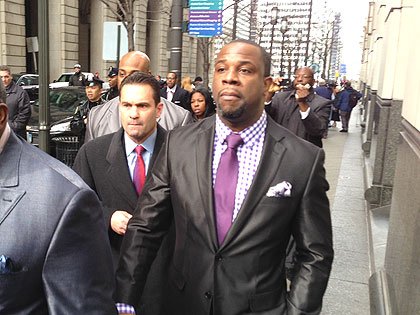 In a non-jury trial, Judge Patrick Dugan ruled Tuesday that Josey was not guilty of simple assault when he struck Aida Guzman, 39, in the face.

Guzman, who speaks Spanish, testified through a translator that she had been struck by Josey with a closed fist to her mouth.

Josey testified that the woman refused to drop a bottle of beer she had been holding. He said that he went to knock the bottle from her hand and was "shocked" to see her go down when his hand hit her face. She was originally charged with disorderly conduct but the charges were later dropped.

Judge Dugan admitted he was "troubled" by the video that caught part of the incident and went viral shortly afterward, but says there was more going on than revealed in the video - describing the scene as "chaos" and "volatile."

All things considered, Dugan said, he had to rule Josey not guilty.

CBS Philly reports there was immediate cheering in the courtroom, where the gallery was packed with police officers. The judge demanded order, and the celebration by Josey's supporters moved outside the courtroom.

Josey was terminated by the Philadelphia Police Department in the wake of the uproar over the incident that was videotaped by a bystander. After today's verdict, he said he wants his job back.

Outside the courtroom, Josey said he had never intended to hit Guzman and said he thought the judge's decision was fair, the station reports.

John McGrody, a vice president in the Philadelphia police officers' union, says they are confident that Josey will ultimately be back on the job, according to the station.

The station reports an attorney for Guzman said he intends to file a civil suit against Josey and contact the U.S. Justice Department.

A short time after the hearing, District Attorney Seth Williams issued a statement saying he disagrees with the judge's ruling.

"While I believe Jonathan Josey was guilty of simple assault this is not the time to dwell on that and I hope as a community we can move past this," Williams said.