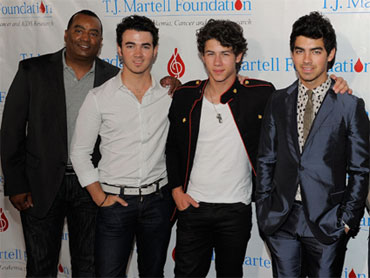 The manager behind the Backstreet Boys, 'NSync and the Jonas Brothers is looking online for his next pop act.

On Wednesday, Johnny Wright will begin accepting video auditions worldwide from aspiring musicians, ages 16 to 30. The field will gradually be winnowed down through challenges and a boot camp in Los Angeles.

Wright's search will be followed in the 21-episode Web series "On the Spot: Johnny Wright's Quest for the Next Pop Sensation." It will be streamed by AT&T's U-verse TV service, and Cambio.com, the music site co-owned by the Jonas Group, AOL and MGX Labs.

Wright is recognizable not just from the acts he has managed but also from Sean "Diddy" Combs' MTV show "Making the Band" and NBC's short-lived "Fame." He said he's often approached in public -- at places like the Cheesecake Factory or Footlocker — where people give impromptu auditions, singing a song or rapping a few lines.

"I always felt uncomfortable because I felt like I had to give them an immediate response to what they did and I didn't have enough time to register what they did," Wright says. "A friend of mine named Doug flipped out his camera phone, and he started filming the person on camera."

Wright would upload the videos to his website, www.wegmusic.com, and see what fans thought of the performers. Later, when Cambio asked about a possible Web series, Wright said his improvised auditions might be the basis of something.

Auditions will run through Feb. 25. The series, which can be watched online and on mobile phones through U-Verse and Cambio, will begin in January.

Wright says he wants to see sincere passion come through in the auditions.

"When I see something that I like, my leg starts to shake back and forth," says Wright, laughing. "That's my tick. When that happens, I know I'm interested in something."