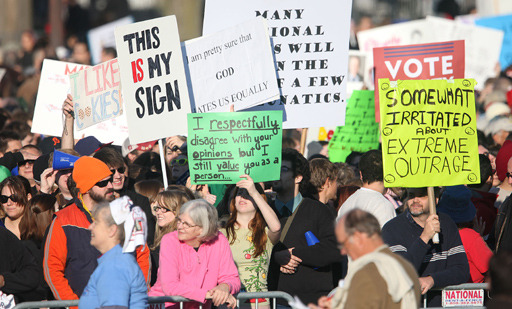 WASHINGTON -- At the corner of Seventh St. and Constitution St. in Northwest Washington on Saturday, countless individuals stood shoulder to shoulder, gridlocked in a solid mob of people trying to cram onto the National Mall for Comedy Central's "Rally to Restore Sanity and/or Fear." People were getting anxious and confused -- but they remained courteous and cooperative.

"Move north!" one man shouted. "It's the only way out, and we need to let everyone know."

Before long, several others around him were shouting, "Move North!" Quickly, the crowd was moving again in lines streaming north and south.

"You have to put in work," one young man observed. "It's like the government!"

The scene could have been disastrous, but the acknowledgment of common goals and a cooperative spirit kept things moving. It was exactly the message the hundreds of thousands of rallygoers wanted to send to Washington.

Kathleen Gordon-Ross, 35, traveled all the way from Lawrence, Kansas with her husband and five children, ages two to 10, to help get that message across.

"There were a lot of things that needed to be fixed -- they're two years in," she said of President Obama. "It's being able to recognize the progress that has been made and that progress will continue. Has everything been fixed? No. Will [Obama] fix everything? No. There still needs to be cooperation, looking at the interests of the country as a whole rather than what the interest groups or politicians think is a good idea."

Gordon-Ross isn't affiliated with any political party, and her husband is a registered Republican. They kept a picture of George W. Bush on their refrigerator during his presidency so their children would know who the president was. She said she and her husband tend to vote for politicians based on their positions and ideas, rather than their ideology. She couldn't name a single politician, however, who she thinks does a good job creating a spirit of bipartisanship or cooperation in Washington.

A number of people remarked that there are no politicians who are willing to listen to the voices in the middle. So while they came out to the Mall to enjoy some comedy and musical performances, they also wanted to remind Washington that they are there -- and they vote.

"If the rally is all joking, they're not going to take us seriously, and the point of gathering is to make our voices heard," Gordon-Ross said. "If the politicians don't see that people actually care... I don't want to be made a joke."

Judging by the signs, some folks at the rally did simply want to make a joke ("Bacon IS good for you!"), while others were clearly serious ("Nurses for health care reform"). Others, meanwhile, seemed to miss the point of the rally entirely (such as a sign with conservative leaders like Mitt Romney and Sarah Palin with Hitler mustaches).

"I think we're making a statement, but maybe not a political statement," said Emily Wallace of Portsmouth, New Hampshire. She and her friends were dressed as "Where's Waldo" and carrying a "Have a nice day" sign. "We're just saying, have fun, it's not all serious, we're not all going to die. I think it's a good chance for people on the radical right and the radical left to see that people are just people."

Claudia Salinas, 26, and Lorena Salinas, 22, from Ontario, California were also dressed up -- but their costumes had a more serious message. Following Comedy Central host Steven Colbert's suggestion, the two dressed up as what they fear the most.

"What we fear is our country being torn down the middle," Claudia Salinas said, explaining their Civil War costumes. Lorena was wearing a Confederate hat, while Claudia was wearing a hat from the North, as well as a Mexican sombrero on her back to represent her Mexican heritage. "Whether it be from the North to the South, or from the left and right, when there is a line drawn down the middle it leads to unmeasurable repercussions."

Claudia Salinas said she and her sister were particularly motivated to attend the rally because they are moderate conservatives.

"I think being a registered Republican, I've more often than not seen moderate Republicans shunned," she said. "Those that are running for a moderate position don't seem to be getting support, either from the media or their party."