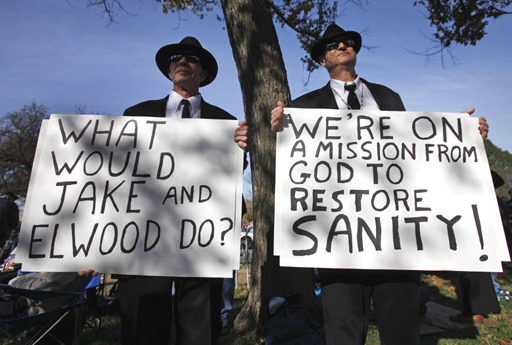 The enemy, Jon Stewart told the masses gathered on the Mall in Washington Saturday for his "Rally to Restore Sanity and/or Fear," is not people of faith, or activists, or those who want to have passionate argument, or those on the right, or those on the left.

The enemy, he argued, is not Americans at all. It is instead the false image of Americans being pushed by the cable news-driven media - what he called "the country's 24-hour politico pundit perpetual panic conflictinator - that he said is broken and making the country's problems worse.

"If we amplify everything, we hear nothing," Stewart said, accusing media outlets of fearmongering and spotlighting extremists instead of reasonable Americans. He later added that the press is America's immune system - and "if it overreacts to everything, we actually get sicker."

Stewart's comments came toward the end of the three-hour rally that attracted about 215,000 to the Mall according to an estimate commissioned by CBS News, with a message of standing up for reasonable dialogue.

Signs hoisted in the crowdranged from serious ("I support reasonable conclusions based on supported facts," "Restore Sanity. Fight Fox," "I fought Nazis and they don't look like Obama") to the silly (a picture of the Republican and Democratic mascots and the words "Everyone Poops").

PICTURES: See Aerial Views and Signs from the Rally

That mix was not unlike the rally itself, a sometimes-uneasy mix of comedy and a call to (metaphorical) arms. Stewart handed out "medals of reasonableness" to pitcher Armando Galarraga, who was kind to an umpire who robbed him of a perfect game; professional wrestler Mick Foley for his work outside the ring, including defending a child mocked for being seen as gay; Velma Hart, who offered polite but critical questions to President Obama at a town hall; and Jacob Isom, the "dude you have no Koran" guy who decided to defuse a Koran burning by taking away the Koran.

His co-host Stephen Colbert, who portrays a fearmongering conservative talk show host seemingly modeled on Fox News' Bill O'Reilly, countered with "Medals for Fear," including one for the media outlets who banned their employees from attending the event unless they were covering it. (CBS News was among those criticized for doing so, though the network did not take that step.)

"I could have found a more productive way of expressing my frustrations...next time, I'll try to work things through before losing my cool," said Slater.

John and Rita Maffei, a couple in their 50s who had come to the rally from Fairfield, Connecticut, said they were there simply for the opportunity to laugh at a media and political world that turns them off.

"I'm not a fan of politics," said John Maffei. "I think there's a lot of pettiness out there right now. It's ugly all around. I think it's really good to start laughing again. Stop taking ourselves so seriously."

The Maffeis were part of a small but visible contingent of older Americans who joined younger people like 19-year-old Anthony DiSilva of Syosset, New York at the event.

"I mean, I'm not watching CNN or FOX or whatever else," DiSilva said. "I'd like to vote, but I feel like I don't know what's going on. I mean, it's confusing. Trust this guy, hate this other guy. I don't know if I'm going to vote, but today helps a lot. At least I'm not the only one who's confused."

Though the rally was ostensibly non-political, groups like the Democratic National Committee, hoping to capitalize on the gathering ahead of Tuesday's midterm elections, organized events in conjunction with it. Democrats greeted people attending the rally with requests that they get involved with canvassing efforts nationwide.

The event opened with a musical performance by The Roots and John Legend, and musicians performed throughout, among them Sheryl Crow, Kid Rock, Tony Bennett, and Jeff Tweedy. Among the celebrity guests were the hosts of "Mythbusters," actor Sam Waterston - who read a poem ostensibly penned by Colbert about all of the bad things that might happen to you - and basketball player Kareem Abdul-Jabbar, who came onstage to assure Colbert that not all Muslims are terrorists.

At one point, the musician formerly known as Cat Stevens, who know goes by Yusuf, came on to perform "Peace Train" before Colbert interrupted him to bring out Ozzy Osbourne, who performed "Crazy Train." Eventually they both cleared the stage for the O'Jays, who sang "Love Train," a train both Colbert and Stewart agreed they would get on. (Colbert only did so because love could mean sexually transmitted diseases.)

Early in the rally, Stewart joked that there were ten million people there, adding sarcastically that attendance reflected a "perfect demographic sampling of the American people." (It was, in fact, largely white.) He mocked the media for the way they've covered rallies in the past.

The rally included references to Glenn Beck, the Fox News host who held his own rally this summer, a rally that some have suggested Stewart's event was an answer to. (Beck also gave out four medals at his rally.) But they were not direct: Instead, Beck was lumped in with both conservative and liberal commentators as part of the reason, in Stewart's eyes, the media is failing America.

Beck, Keith Olbermann and others appeared in montages offering incendiary rhetoric that Stewart deemed dispiriting. (Olbermann did not take kindly to this: "It wasn't a big shark but Jon Stewart jumped one just now with the 'everybody on [24 hour] cable is the same' naivete," he wrote on Twitter.)

Colbert, who was ostensibly there to rally on behalf of fear, celebrated such rhetoric while Stewart condemned it. At one point Stewart quoted Franklin Delano Roosevelt's comment that "the only thing we have to fear is fear itself." Colbert countered that twelve years later, Roosevelt was dead.

Stewart clearly came with a serious message, and toward the end of the rally he nearly dropped his comedic persona altogether. He uttered phrases like "individuals can be scary but you can't generalize about all people," a reference to those who consider all Muslims to be terrorists.

He said it was a mistake to lump in those who aren't bigots -- he mentioned Juan Williams and Rick Sanchez specifically -- with those who are, calling that an insult not only to them "but to racists who have put in the exhausting effort it takes to hate."

Stewart also said most of the scary stories on cable news are overblown and argued that Americans can overcome the ones that aren't.

"The image of Americans that is reflected back to us by our political and media process is false. It is us through a funhouse mirror," he said. He added that it's no surprise that people don't want to reach across the aisle when they are told the other side is made up of Marxists on the left and racists on the right.

"We hear every damn day about how fragile our country is, on the brink of catastrophe, torn by polarizing hate, and how it's a shame that we can't work together to get things done," he said. "But the truth is we do. We work together to get things done every damn day. The only place we don't is here [in Washington] or on cable TV. But Americans don't live here or on cable TV. Where we live our values and principles form the foundation that sustains us while we get things done."

Stewart said most Americans don't live as liberals or conservatives or Republicans or Democrats but as "people who are just a little bit late for something they have to do." He used the fact that Americans are willing to merge together into a tunnel, one by one, to illustrate the fact that people can and do work together despite their differences.

"And sure, at some point there will be a selfish jerk who zips up the shoulder and cuts in at the last minute, but that individual is rare, and he is scorned - and not hired as an analyst," Stewart continued.

Shortly after he turned the stage over to Bennett, who closed the event with a rendition of "America the Beautiful" that prompted a "USA" chant from the crowd.

"Sanity will always be and has always been in the eye of the beholder, and to see you hear to day, and the kind of people that you are, has restored mine," Stewart said.

The rally aired on Comedy Central, where Stewart and Colbert host their late night shows, as well as C-Span. Comedy Central told the New York Times there were four million views of their live rally web stream.

Stewart said after the event that he "stayed up late last night and just wrote until I was done. I wanted to speak a little bit from the heart."

Asked how he expected the event to be covered, Stewart said, "I couldn't care, I just don't care. We're proud of ourselves and proud of the show we did."

"Our currency is not this town's currency," he said. "We're not running for anything. We have TV shows and we just hope people continue to like them."

Added Colbert: "What surprised me most was the joy of seeing the audience out there."

Brian Montopoli is a political reporter for CBSNews.com. You can read more of his posts here. Follow Hotsheet on Facebook and Twitter.
View CBS News In
CBS News App Open
Chrome Safari Continue
Be the first to know
Get browser notifications for breaking news, live events, and exclusive reporting.