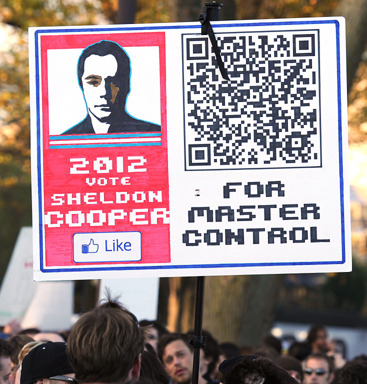 Presented without comment, some of the slogans seen on signs at the Jon Stewart/Stephen Colbert "Rally to Restore Sanity and/or Fear" on the Mall in Washington today:

"Keep Big Government Out of my Cauldron." (showing Christine O'Donnell as a witch.)

"tea parties are for little girls."

"I support reasonable conclusions based on supported facts."

"I'm for the separation of church and hate."

"Guacamole" (followed by a recipe for guacamole.)

"Teabaggers leave a bad taste in my mouth."

"This sign mocks extremists in a witty and humorous manner."

"I fought Nazis and they don't look like Obama."

"Signs are an impractical medium for civil discourse."

"Big Signs are for Bullies."

Jon Stewart Rallies for Sanity -- and Against Cable News