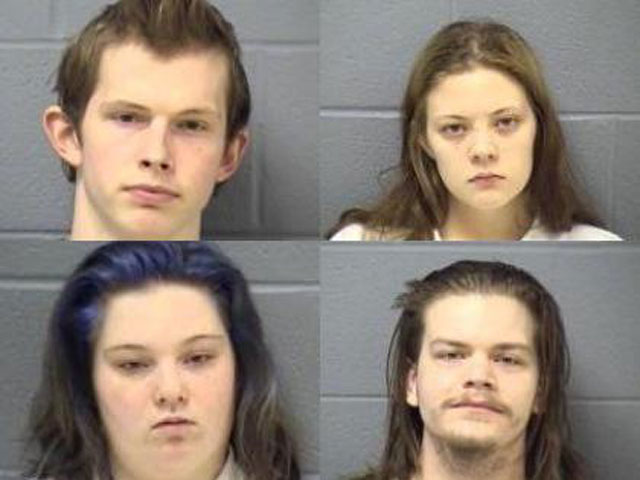 (CBS) JOLIET, Ill. - The suspects and victims in a bizarre double murder in Joliet appear to have been friends, reports CBS Chicago.Pictures: Four charged with grisly Ill. murders

Adam Landerman, 19, Alisa Massaro, 18, Bethany McKee, 18, and Joshua Miner, 24, have been accused of luring Terrance Rankins and Eric Glover, both 22, to Massaro's home on Jan. 10, then robbing and killing both victims.

CBS Chicago reports that a friend of Rankins shared a photo that had been posted on Rankins' Instagram profile just two days before his murder. It appeared Rankins might have taken the photo of Landerman and McKee, who are facing each other in the picture, with a mirror in Landerman's lap, and markings on his face.

It is unclear what the group was doing at the time.

"This is something that had been brewing in their system for a long time. That was some diabolical acting right there," said George Leftridge, a friend of the victims. "Ain't no excuse out here. It can't be no drug out here going to make a person do that."

Joliet Police Chief Michael Trafton said the four suspects were not tested for drugs or alcohol when they were arrested.

Landerman is the son of a Joliet police sergeant.

Pictures posted to what appear to be Landerman's and McKee's Facebook pages also showed gory self-portraits.

County records showed Massaro has a restraining order against Miner, who has an extensive criminal record - including a pending child pornography charge.

Trafton said he's never seen such a disturbing crime scene in his 27 years on the job.

The suspects are due back in court on Feb. 5.