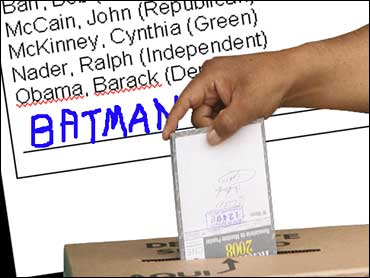 Tempted to cast a write-in vote for Bart Simpson in Tuesday's primary election?

Please, don't do it, say Vermont elections officials, who warn that such ballot-box frivolity can make tabulating votes costlier and more time-consuming.

"Almost every election, there's people who, I guess, think it's fun to throw their vote away, basically," said Manchester Town Clerk Linda Spence. "And while it may be worth a few giggles while you're behind the curtain, it's actually costing you tax dollars."

In several recent elections, someone in that town has cast a write-in ballot for Madonna, even though she's never run for any public office in Vermont.

Vermont voters on Tuesday join those in six other states and the District of Columbia in deciding general election matchups. Nominations for House, Senate and governor are on the line.

Optical scanner machines used in many Vermont communities are programmed to spot the oval filled in by someone indicating they've written in a name, thereby setting those ballots aside so they can be counted by hand.

Then it's up to the town's Board of Civil Authority - made up of Selectboard members and justices of the peace - to examine the ballot to determine the voter's intent. That process takes time, costs money in the communities where vote-counters are paid, and can create other headaches, such as when poor handwriting leaves the voter's intent unclear.

A write-in vote for Mickey Mouse gets thrown out, said Milton Town Clerk John Cushing and others. But some said a vote for Bart Simpson - a character on Fox's animated comedy "The Simpsons" - is trickier, since that could actually be someone's name.

That said, clerks say who you vote for is your business. Voters have "an absolute right to write in anybody they want that's a valid person," said assistant St. Johnsbury clerk Larry Sharer.

In most cases, the recipients of bogus write-in votes are friends or family members of the voter.

"They really get their chuckles out of telling somebody they voted for them for cemetery commissioner," Spence said. "They get in that voting booth and they think it's hysterical."

Some time ago, "a fellow employee here let slip that they had done a write-in as a joke. I said, 'Really? Would you like to come and count the ballots next time?'" Spence said.

She succumbed to it before becoming a municipal government lawyer and then Vermont's chief election officer.

"Occasionally, I would write in my husband's name because I love him and I thought it was cute, and I could tell him at dinner that night that I had voted for him for some office," she said. "That was before I realized how much extra work it is for the workers who count the ballots."

Markowitz and town clerks said they have no problem with someone casting a legitimate write-in vote. Sometimes, candidates decide to run too late to get on a ballot, but then launch a sincere write-in campaign.

Spence told of one election in Manchester in which only nine people were running for 12 positions available as justice of the peace. A 10th candidate stood outside the poll on Election Day, asking people to write her name in and ended up winning election to the position.

Best not to make a joke of it, though.

"They can write in Mickey Mouse if they want, but the vote gets thrown out," Sharer said.