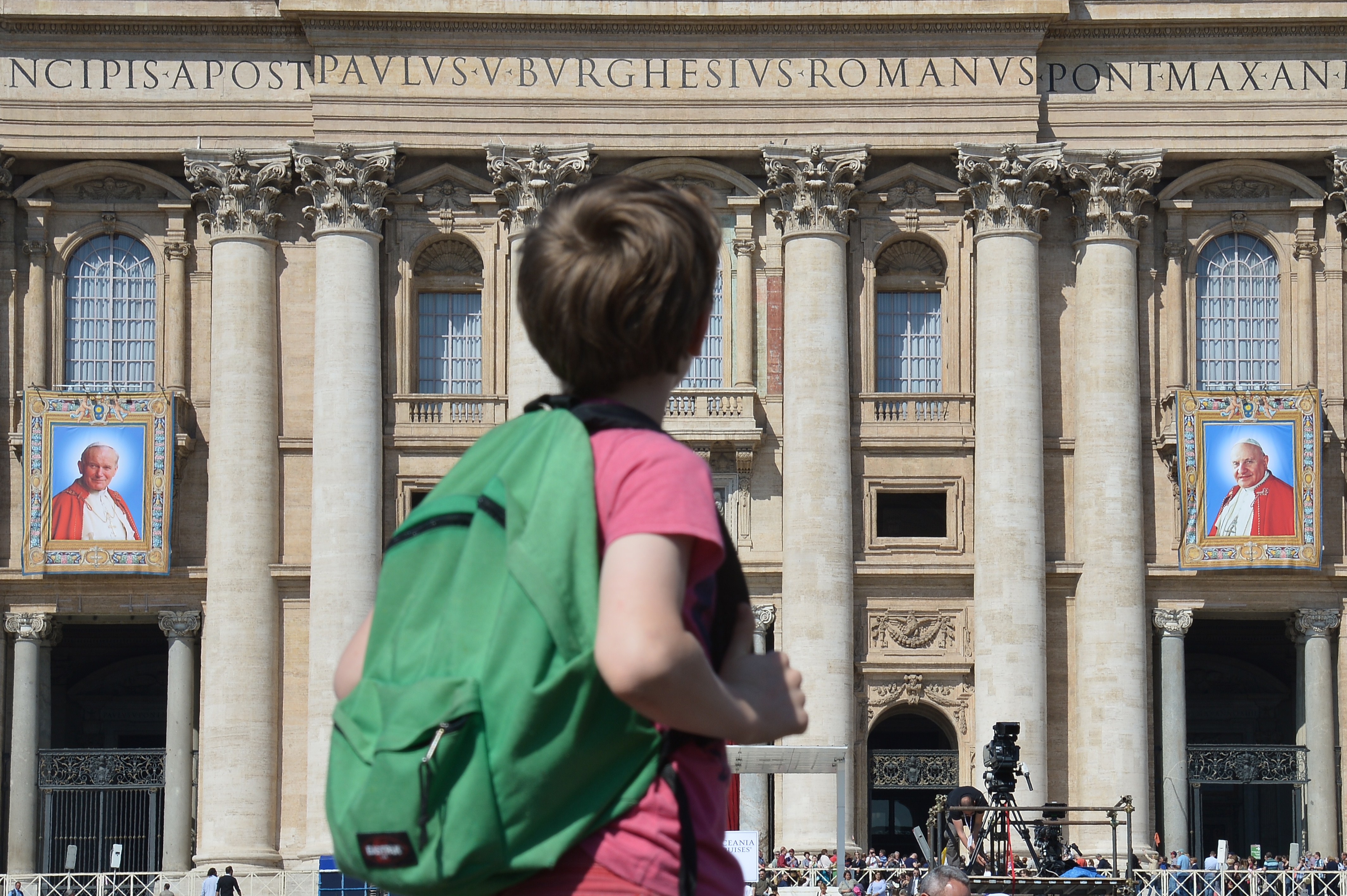 VATICAN CITY -- The joint canonization of Popes John Paul II and John XXIII on Sunday is a convergence of coincidences, personalities and legacies.

Not only is the elevation of two popes to sainthood at the same time unprecedented, but the men sitting in the audience will also represent a first for the Catholic Church; the ceremony will be attended by two popes.

Pope Francis will lead the ceremony as the current head of the church, watched over by his predecessor, Emeritus Pope Benedict XVI.

In another unique canonization twist, it was Pope John Paul II who put Pope John XXIII on the final step to sainthood when he beatified him in September 2000.

Both men are exceptions to the often long and complex road to canonization.

In the case of John XXIII, his life itself was deemed holy enough to serve as a substitute for one of the two miracles usually required for sainthood. Unlike most other saints, John XXIII will reach the vaunted status with only one accredited miracle to his name.

But Francis isn't the first pope to dispense with the two-miracles rule. In 2000, John Paul II waved it for two Chinese martyrs and 119 companions, all of whom were proclaimed saints.

Then there's the speed with which these two popes are being canonized. More often than not, proposed saints languish for centuries before being elevated to the highest pantheon.

John Paul II made the grade in record time; a mere nine years after his death, not least because Benedict XVI waived the usual five-year waiting period -- an answer to the cries of "Santo Subito" ("Make him a saint now") from hundreds of thousands of faithful who filled St. Peter's Square for John Paul II's funeral mass.

For those who like trivia, St. Francis of Assisi -- from whom the present pontiff took his name -- was propelled to sainthood just two years after his death in 1226 by "vox populi," or acclamation by the people.

Both new saints (or about-to-be saints -- it won't be official until Sunday morning in Rome) were global icons of their day, and both played a role in reducing the tensions of the Cold War.

John Paul II is widely held to have been a major contributor to the fall of communism, not least because of his support for the Solidarity movement in his native Poland, which kicked off the revolts in Eastern Europe which eventually led to the fall of the Berlin Wall.

John XXIII's contribution is less widely known, but perhaps no less significant. At the height of the Cuban missile crisis he issued a statement calling for leadership in the cause of peace -- reportedly after a call from President John F. Kennedy. That gave then-Soviet President Nikita Khrushchev the opportunity to cast himself in the role of peacemaker, and two days later he agreed to withdraw the missiles from Cuba.

All four popes -- the two living and the two to be sainted on Sunday -- also share a connection to the Second Vatican Council, which resulted in some of the most sweeping changes and modernization of the Catholic Church in centuries.

It was instituted in 1962 by John XXIII.

Francis himself wasn't physically present at what is now known as "Vatican II," but Vatican spokesman Father Thomas Rosica says the connection was made the moment the new pope appeared on the balcony of St Peter's Basilica.

"The first image that flashed through my mind was John XXIII," he said. "Partly because they look alike, but that voice, the paternal embrace, the humility and the kindness, and I see a great similarity, a great continuity between John's vision and his style and Francis' style of leading the church."

But the fact that all this is coming together under Pope Francis is a quirk of timing, rather than any effort by the current pontiff to make a point, according to Father Robert Dodaro, a professor of early church history.

"I don't think he is thinking about his image or his status in the church," he told CBS News. "Had Pope Benedict been a pope for another year or so, this would've happened under his papacy, so I don't think the timing is really about Pope Francis himself, it's about the course of events that went on in the study of the lives of these two former popes."

John Paul II was widely held to be the first pontiff to truly embrace and use the mass media.

It may not be a coincidence in the sense that so many other things about this canonization are, but there will be 1,200,000 images of the two popes transmitted on screens set up around Rome before the three-hour long ceremony on Sunday.

And in keeping with the fact that Benedict adapted to modern social media by being the first pope to have a Twitter account -- a practice Francis is continuing -- all the information you could ever want about the canonization is available in a free APP, called, not coincidentally, The Pope App.