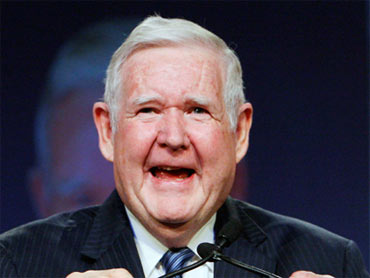 Democratic Rep. John P. Murtha, who represented Pennsylvania's 12th district for 36 years, died today at the age of 77. He died in an Arlington, Va. hospital with his family at his side after suffering complications from gallbladder surgery.

Murtha earned considerable influence in Congress as head of the powerful House Defense Appropriations subcommittee. He used his position of power to secure billions in federal tax dollars for his district, which has struggled with the widespread loss of coal and steel jobs, but came under intense scrutiny for his ties to companies for which he has secured earmarks.

President Obama said today he was deeply saddened by the passing of Murtha, whom he called a "respected voice on issues of national security" with a "tough-as-nails reputation."

"He was a public servant in every sense of the word and his passing is a great loss to all of Pennsylvania," Sen. Arlen Specter (D-Pa.) said in a statement.

As a Democrat from a socially-conservative, pro-union region of western Pennslyvania, Murtha largely voted with his party and was for the most part in tune with his constituents. A respected authority on defense and national security issues, Murtha earned attention in 2005 for strongly speaking out against the Iraq war.

Murtha "understood the misery of war," Rep. Dave Obey (D-Wisc.), chair of the House Appropriations Committee, said in a statement today. "Every person who serves in the military has lost an advocate and a good friend today."

His strong statements on the war in Iraq worked against Murtha in his 2008 re-election campaign, in which he came under fire for calling his constituents "redneck" and "racist." He managed to prevail, however, in the district to which he brought tens of thousands of jobs. Murtha took Pennsylvania's 12th district, which includes his hometown of Johnstown, "in a new direction, intent on diversifying the economy by attracting health care, defense, medical research, tourism and high-tech jobs," according to his congressional Web site.

While Murtha's dealmaking brought jobs to his district, it also brought on a barrage of controversy as questions emerged about his ties to the companies that benefited from his earmarks. The lobbying firm the PMA Group, for instance, closed in 2009 after an the FBI raided its offices as part of an investigation into whether PMA's founder improperly funded campaign contributions to Murtha and other members of Congress.

Relatively early in Murtha's career he gained notoriety for his involvement in the 1980 Abscam scandal where undercover FBI agents posed as Saudi businessmen and tried to bribe members of Congress. Murtha did not accept a bribe, but seemed to leave that door open for the future in videos of the exchange. Murtha was never charged and was ultimately absolved of any wrongdoing by the House ethics committee.

Murtha had a close relationship with House Speaker Nancy Pelosi. After Democrats took back the House in 2006, Pelosi endorsed Murtha over then-minority whip Steny Hoyer (D-Md.) for the position of Majority Leader. But the Democrats' election promise to change the "culture of corruption" seemed shallow to many members if they elected Murtha who had such strong, and often-criticized, ties to lobbyists. Hoyer ultimately prevailed.

"Today, with the passing of Jack Murtha, America lost a great patriot," Pelosi said in a statement. "He served his country in his community winning the hearts of his constituents and served in the Congress winning the respect of his colleagues."

Murtha's service in Congress was preceded by four years as a member of the Pennsylvania House of Representatives. He also served for 37 years in the U.S. Marine Corps. He retired from the Marine Corps Reserve as a colonel in 1990 with a number of distinctions, including the Navy Distinguished Service Medal, two Purple Hearts and the Vietnamese Cross of Gallantry.