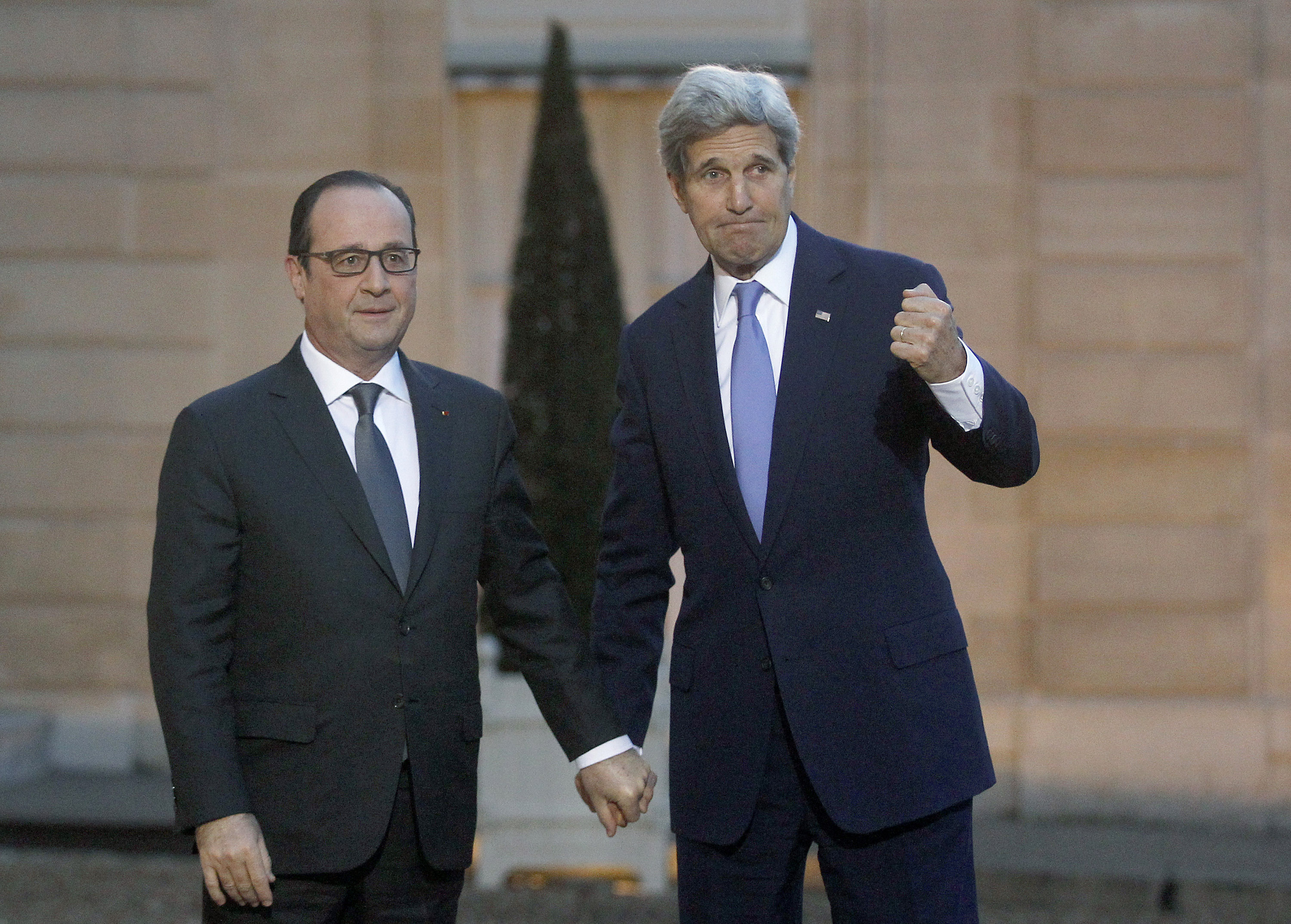 PARIS -- U.S. Secretary of State John Kerry paid respect in both English and French on Friday to the victims of last week's terrorist attacks in Paris in a show of American solidarity with the French people.

At a ceremony at the Hotel de Ville, the city hall of Paris, Kerry called the attacks a "living nightmare" but one that would unite rather than divide the people of France and the world.

"I really wanted to come here and share a hug with all of Paris and all friends," he told the crowd that included survivors, family members of victims, and members of the police and municipal government who responded to the attacks, including the Muslim man who risked his life to hide Jewish patrons from the gunman who stormed a kosher supermarket. "I wanted to express to you personally the sheer horror and revulsion of all Americans for the cowardly and despicable assault on innocent lives," Kerry said.

The secretary's visit to Paris, his 19th to the city since he became secretary of state, came amid lingering criticism in the United States of the Obama administration's failure to send a Cabinet-level official to Paris for last Sunday's unity march that attracted some 40 world leaders and more than a million demonstrators. Kerry did not address the matter but pointedly stressed the close bonds between the U.S. and France.

"I represent a nation grateful each day that France is our oldest ally," he said before introducing his friend, musician James Taylor, who performed his hit "You've Got a Friend," starting with several bars of the French national anthem. The event was called an "Homage de John Kerry a Paris."

On a day tinged with sorrow and a city still on edge in the aftermath of the violence, Kerry met earlier with French President Francois Hollande and Foreign Minister Laurent Fabius before visiting the sites of the attacks, offering silent prayers and laying wreaths to honor the dead under heavy security.

Underscoring heightened fears, police evacuated a major train station in the city after a bomb threat as Kerry's motorcade sped from site to site. And the French Interior Minister said 12 people had been arrested in anti-terrorism raids around Paris.

Kerry, who had made the point earlier this week that he was coming with a "hug," did just that as he embraced Hollande in the courtyard of the presidential palace.

"I think you know that you have the full and heartfelt condolences of the American people and I know you know that we share the pain and the horror of everything that you went through," he told Hollande. "Our hearts are with you."

Hollande said the French people "were the victims of an exceptional terrorist attack. We must therefore together find the necessary response."

Later, Kerry and Fabius laid a wreath at the Hyper Cacher kosher market, one of the two sites that had been attacked last week. The wreath was just the latest addition to a long stretch of flowers and candles that have been placed alongside police barriers that surround the market.

At the market, Kerry and Fabius spoke briefly with Joel Mergui, the head of France's Rabbinical Council, before heading to the memorial to those killed at the Charlie Hebdo satirical newspaper by gunmen linked to al Qaeda's Yemen branch to avenge the publication of cartoons mocking the Prophet Mohammed.

There, at a makeshift memorial down the street from the newspaper's office, they laid another wreath and were joined by Francois Vauglin, the mayor of the district.

Then Kerry, accompanied by U.S. ambassador to France Jane Hartley, walked the short distance to where a Paris police officer was killed by the gunmen and placed flowers at the site.