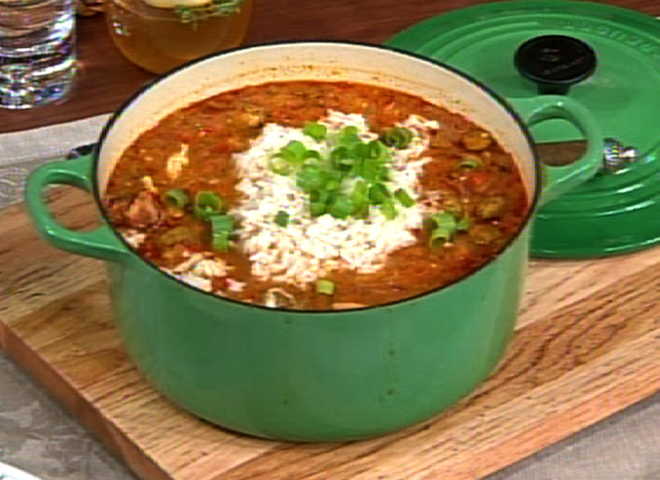 Since then, his empire has expanded. He now owns three other eateries.

In 2009, John won the James Beard Award for Best Chef in the South.

He's appeared on Bravo's "Top Chef Masters" and stars in "The Adventures of the Big Bad Chef" video series, which highlights trips through lesser-known food spots of the deep South.

Melt butter in a large saute pan and saute onion and garlic until tender.

Stir in crawfish tails and season lightly with salt and black pepper.

Blend in corn and tomatoes and simmer until tomatoes release their water and it begins to evaporate.

Stir in creole seasoning and heavy cream and simmer over medium heat for about ten minutes.

Remove from heat season to taste with salt and black pepper and let cool to room temperature.

Stir in scallions and store chilled in plastic.

Combine above ingredients and store in air-tight plastic container.

Whisk yolks and sugar together in a stainless bowl until well blended and pale.

Whisk in port and blend again.

Place over double boiler and whisk constantly until tripled in volume.

Remove from heat and allow to cool briefly.

Whip cream with powdered sugar and vanilla to stiff peaks.

Fold into sabayon and chill. (This should hold up for a full evening's service)

For more of John's recipes, go to Page 2.

You can almost use whatever kind of seafood is available; that is the beauty of this dish; it's a repository for whatever you have available.

Render the bacon. Add 3 Tbsp. butter and 3 Tbsp. Flour and make a light brown roux. Stir in and sauté the onions and garlic until tender. Add and sauté the bell peppers. Stir in the okra and season with salt and black pepper. Add tomatoes and Creole seasoning and bring to a simmer. Stir in wine, lemon, and stock, and then bring to a boil. Simmer for 25 minutes or until courtbouillon begins to thicken. Add seafood to the courtbouillon and cover. Simmer for 10 minutes. Season with salt, pepper, Tabasco, and Creole seasoning to taste.Serve with cooked rice.

There are scores of punch recipes attributed to different artillery, cavalry and infantry divisions from the Revolutionary and Civil Wars. Most are similar in that they are combinations of multiple liquors, sugar and fruit. They are really just quasi-sophisticated versions of "jungle juice" punches we used to make for high school keg parties. The intention was exactly the same -- only we hadn't been fighting hand-to-hand combat!

This recipe is a slight variation on one that Jayce McConnell (director of our cocktail program at Snackbar) made in honor of the 20th anniversary of City Grocery. The University Grays were the Confederate infantry division from Oxford, made up of almost all Ole Miss students. They suffered an almost 100 percent mortality or injury rate during Pickett's Charge at Gettysburg. This stuff is strong!

Stir together all of the above ingredients in a punch bowl. Float one large ice cube in the center and ladle punch into punch cups or Champagne slippers.

Shrubs come in a couple of varieties. Some are acidic (vinegar-based), others more syrupy (just sugar and fruit). Both were vehicles for preserving (at least in the short term) summer fruits. Traditionally, both varieties are cooked, strained, then used to mix for beverages -- both alcoholic and non-alcoholic. The non-alcoholic varieties are likely what preceded modern day "sodas." This recipe is actually uncooked, so every bit of the brightness in the lemon and oil in the thyme leaves are uncompromised. These oils lose their potency when subjected to heat.

Makes about 2 cups of shrub

Peel lemons, being very careful to get as little of the white part of the pith off the lemon with the peel. Place in a 1 quart glass jar. Carefully remove the white pith from the lemon and discard. Slice the meat of the lemon and add to the jar. Add the rest of the ingredients except for the vodka, cover allow to stand at room temperature for three days. Add the vodka, shake vigorously, strain and pour into a clear jar.

Will keep for three months.