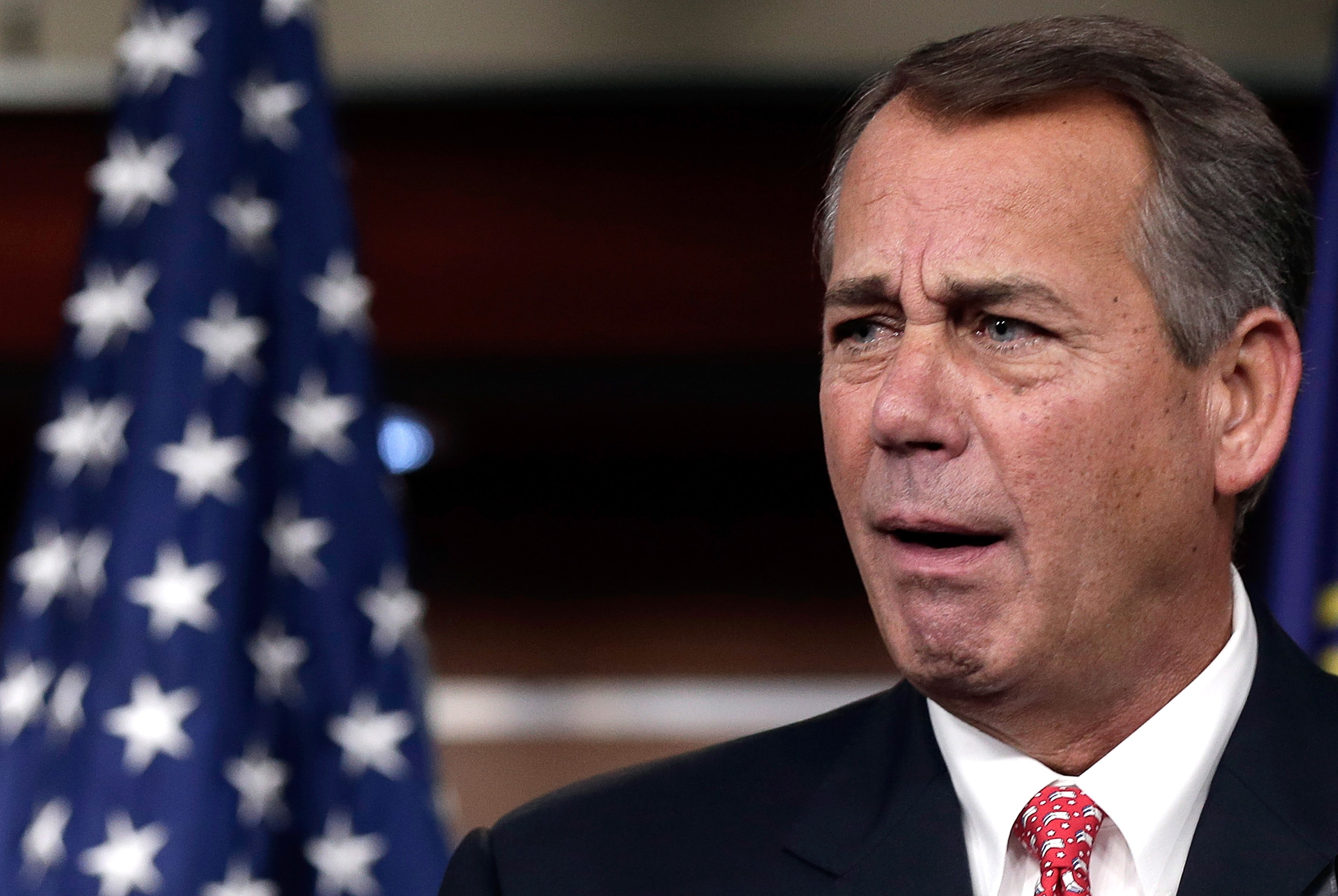 House Speaker John Boehner, R-Ohio, mocked his Republican colleagues for being too scared to reform the nation's immigration laws during a speech Thursday in his home district.

"Here's the attitude: 'Ohhhh. Don't make me do this. Ohhhh. This is too hard,'" he told a meeting of the Middletown Rotary Club.

"We get elected to make choices. We get elected to solve problems and it's remarkable to me how many of my colleagues just don't want to," he continued. "They'll take the path of least resistance."

Boehner said his work pushing the House of Representatives to deal with immigration reform has earned him a few bruises. "I've had every brick and bat and arrow shot at me over this issue just because I wanted to deal with it. I didn't say it was going to be easy," he said.

In a strong bipartisan vote last June, the Senate passed a comprehensive immigration reform bill, including a path to citizenship for undocumented immigrants. House Republican leaders have said they will not schedule a vote on the Senate bill, and the lower chamber has not advanced a comprehensive bill of its own, though several smaller measures on border security and immigration law enforcement have cleared the House Judiciary Committee.

President Obama and congressional Democrats have roasted the House for failing to act on immigration reform. They've accused Boehner of appeasing his party's far right wing at the expense of sensible, bipartisan policy. Even some Senate Republicans have predicted that the Senate bill would pass if Boehner ever brought it to the floor.

Boehner, ultimately the only person who could force the House to vote on a bill, has said he recognizes the nation's immigration system is broken, but he's also said he doesn't want to get out in front of his conference - that he wants the House to "work its will" on immigration.

His tone on Thursday could be a sign that the speaker is prepared to administer a dose of tough medicine to House Republicans, but it may also earn him a few more bruises from his party's right flank.

As Congress stalls on the issue, Mr. Obama has signaled that he's ready to continue acting through executive order to reform portions of the immigration system. He's already offered targeted relief from deportation to some undocumented immigrants, and he recently tasked Homeland Security Secretary Jeh Johnson to review U.S. deportation policy and consider expanding that relief.

Johnson, according to the Associated Press, is considering limiting deportation of those immigrants living in the U.S. without documentation who don't have a criminal record. The change could protect tens of thousands of undocumented immigrants who are removed each year only because of repeated immigration violations, such as failing to heed a deportation order or show up at an immigration court hearing.

Republicans, for their part, blasted the potential executive action as another example of overreach, insisting the administration enforce the laws as written.

In a letter sent Thursday to the president, 22 GOP senators, including Senate Minority Leader Mitch McConnell, R-Ky., said the changes under consideration "would represent a near complete abandonment of basic immigration enforcement and discard the rule of law and the notion that the United States has enforceable borders."

"These policies have operated as an effective repeal of duly enacted federal immigration law and exceed the bounds of the executive branch's prosecutorial discretion," the senators wrote. "Congress has not passed laws permitting people to illegally enter the country or to ignore their visa expiration dates, so long as they don't have a felony conviction or other severe offense on their record.

"Your actions demonstrate an astonishing disregard for the Constitution, the rule of law, and the rights of American citizens and legal residents," they continued.

Even as his administration mulls expanded executive action on immigration, the president has continued pushing Congress to deal with the issue. At a naturalization ceremony in South Korea on Friday, the president said welcoming immigrants is "central" to America's identity, and that reform would administer a valuable jolt to the American economy.

"If we want to keep attracting the best and the brightest, the smartest and the most selfless the world has to offer, then we have to keep this in mind: the value of our immigrants to our way of life," he said. "It is central to who we are; it's in our DNA. It's part of our creed. And that means moving forward we've got to fix our broken immigration system and pass common-sense immigration reform."

"This is a huge advantage to us -- the talent that we attract," he added. "We don't want to make it harder; we want to make it more sensible, more efficient. That's why I'm going to keep on pushing to get this done this year, so that others like the young men and women here have the opportunity to join our American family and serve our great nation."