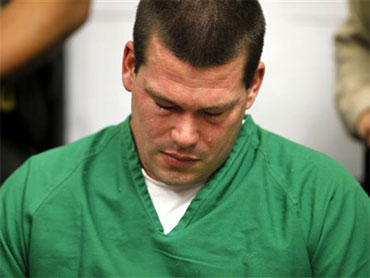 John Albert Gardner III wept openly in court Friday as he was verbally skewered by the parents of two San Diego area teens he'd confessed to raping and murdering.

Gardner was sentenced to two consecutive life terms without the possibility of parole for killing Chelsea King, 17, and Amber Dubois, 14. He also got a 25-year minimum for the attempted rape of Candice Moncayo, a jogger who was able to escape by smashing him in the nose with her elbow.

"You now have to spend the rest of your life, an eternity in the worst and deepest parts of hell," said Kelly King, Chelsea's mother, in a statement typical of what Gardner heard from the families whose lives he shattered.

In recent telephone statements to CBS affiliate KFMB in San Diego, Gardner asked, "Do you think that I don't have guilt and I don't hate myself for what I did? I was not in control." He also predicted he'd be killed by fellow inmates within five years.

But criminal profiler Pat Brown was having none of that on "The Early Show on Saturday Morning."

"For some families," she told co-anchor Betty Nguyen, "just the ability to be able to get that rage out, to get it out to the public as well as to the person who victimized their children, it feels good for them to do that. But they don't want to make a mistake to believe that he actually gives a darn.

"Everything that John Gardner did in that courtroom is an act. He doesn't care what they say to him. He's not feeling bad about what they say to him. He doesn't feel bad about what he did to their children. In the words of the serial killer Clifford Olson, 'If I gave a damn about the parents, I wouldn't have killed their children.' John Gardner does not care. He's looking for sympathy. And that's what his whole game in the courtroom was -- a sympathy ploy.

"That sobbing," Brown continued, "think about it -- this is a man who brutally murdered two beautiful little girls and, while they were looking up at him, screaming, 'No, don't do this to me. I want my mommy,' he didn't care one bit. Do you think he really feels bad for them now? No, no, no, he feels bad for himself, and he wants everyone out there to realize he's a victim, too. (He wants people to think) he's suffering, too, and he's going to have as to go to prison and he might get killed in prison. Feel sorry for me. Ladies, you can write me in prison, you can help me out."

"He's (acting as if he's) a victim of society, he's a victim of his raging chemicals in his brain. He feels bad about what he did, so everyone have some pity on me. So now, he's gonna play his new game in prison and he will get lots of letters from ladies. I can guarantee you. (He) may get a girlfriend. May get married. He's gonna have his fun in prison, and that's the sad part about it all. Don't feel sorry for John Gardner. He doesn't feel sorry for anything he's done."

Can confronting their daughters' killer help bring closure to the parents?

"There's really no such thing as closure," Brown replied. "It's a really silly word in a sense. You don't close the door on your child who's been murdered. What you have are answers and a level of acceptance. ... But when you wake up in the morning, your daughter's not there, and you still have to live with it and all you can hope is at they find some way to deal with this, maybe to help other families and fight against the criminal justice system and keep guys like this behind bars (Gardner served five years of a six-year sentence for beating and molesting a 13-year-old San Diego girl in 2000) ... So maybe they'll get some good, positive feelings from that. But it's a long road and closure never really happens."