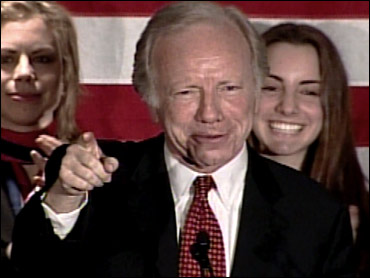 This column was written by John Nichols .

After he emerged as just about the only member of Congress — Democrat or Republican — who is enthusiastically on board for the Bush administration's hellride in Iraq, local Democratic party groups in Connecticut began passing resolutions criticizing the Democratic senator's pro-war stance.

Lieberman and his aides said the grassroots Dems were just letting off steam.

Then, the senator attracted an able Democratic primary challenger in the person of progressive businessman Ned Lamont.

Lieberman's organization said Lamont would never get on the ballot.
Then, at the state Democratic convention over the weekend, Lamont got more than twice as many votes as he needed to secure a ballot position.
Lieberman backers noted that their man got the most votes at the convention and said the inside-the-party revolt would not translate into trouble in the August 8 Democratic primary.

Now, Democracy for America, the organization formed from the base of Howard Dean's 2004 campaign for the Democratic presidential nomination — which, notably, did a lot better than Lieberman's presidential quest of that year — has given a strong endorsement to Lamont's challenge.

"Ned Lamont has been loud and clear about America's position in Iraq and world affairs, one of the most important concerns for voters," says Jim Dean, the chair of Democracy for America, and the brother of the man who now heads the Democratic National Committee. "Senator Lieberman has been a broken record supporting broken policies."

While the Democracy for America endorsement will help with fund raising and volunteers, it certainly isn't going to give Lamont everything he needs to win a primary. By every measure, the challenger still faces an uphill race in a state where Lieberman has been a central figure in the Democratic Party for four decades.

But the senator is feeling the heat. On Monday, he dropped out of the MoveOn.org web primary, in which members of the group are being asked to express their preference in the race — as they did early in the race for the 2004 Democratic presidential nod. No one doubted that he was seeking to avoid another setback.

Nor does anyone doubt that the man the Democrats nominated for vice president in 2000, and who looked at the start of the year like a sure bet for reelection, is going to have to fight to be the party's nominee for his own seat in 2006.
By John Nichols
Reprinted with permission from The Nation