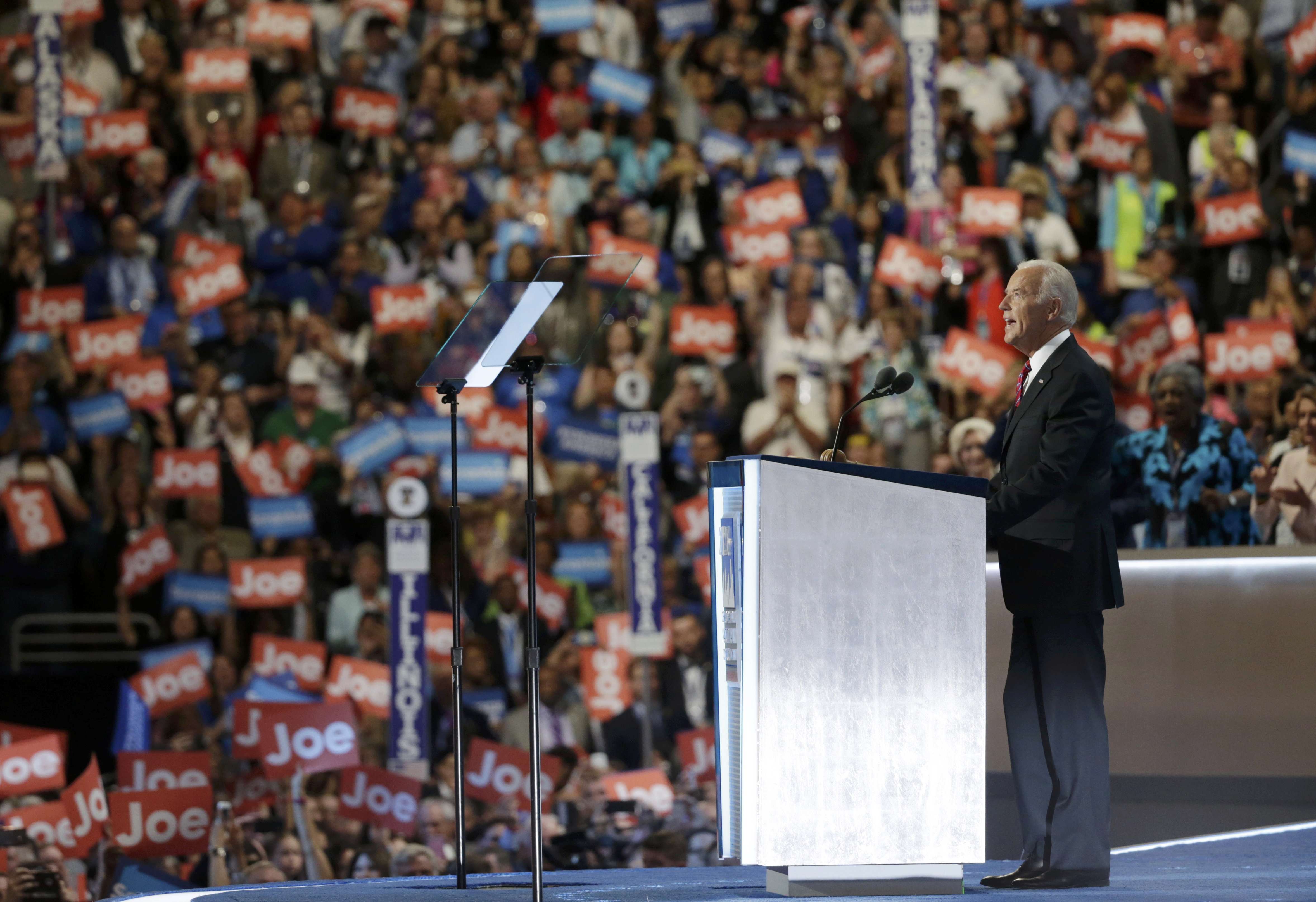 "We do not scare easily, we never bow, we never bend, we never break when confronted with crisis. No, we endure, we overcome and we always, always, always move forward," he said of the United States' strength. "That's why I can say, with absolute conviction, I am more optimistic about our chances today then when I was elected as a 29-year-old kid to the Senate."

"We are America, second to none, and we own the finish line," he said. "Don't forget it."

Biden opened his speech by reminiscing about his own night accepting the party's nomination for vice president back in 2008.

"Eight years ago I stood on the stage in Denver and I accepted your nomination to be Vice President of the United States," he said. "And every single day since then, it's been the honor of our lives for Jill and me, every day we've been grateful to Barack and Michelle for asking us to join them in an incredible journey--a journey that could only happen in America."

He also paid tribute to his son Beau, who died of cancer in 2015. Last year, as Biden weighed whether or not to launch a presidential bid of his own, his grief over his son's death played a big role in the decision to sit out 2016.

"I see so many friends and colleagues ... I see the faces of those who placed their belief in Barack and me. So many faces but one," he said. "This is kind of a bittersweet moment for Jill and me and our family. In 2008, when he was about to deploy to Iraq, and again in 2012, our son Beau introduced me to the country and placed my name into nomination."

"You got a glimpse of what an incredible fine young man Beau was," he said. "...As Ernest Hemingway once wrote, the world breaks everyone and afterward many are strong at the broken places."

Biden spoke about Hillary Clinton as a smart and passionate leader, noting he's known her for more than 30 years and has worked with her in the Senate and over weekly breakfasts when she was Secretary of State.

The vice president then turned his attention to GOP nominee Donald Trump, saying the idea that he cares about the middle class is--in signature Biden fashion--"a bunch of malarkey."

"His cynicism is unbounded," he said of Trump. "His lack of empathy and compassion can be summed up in the phrase I suspect he's most proud of having made famous, 'You're fired!'"

Biden continued, saying Trump "doesn't have a clue about the middle class, not a clue"--prompting chants from the crowd of "Not a clue! Not a clue!"

More than his inability to help the middle class, Biden said, Trump would be dangerous for U.S. national security.

"No major party nominee in the history of this nation has ever known less or been less prepared to deal with our national security," he said. "We cannot elect a man who exploits our fears of ISIS and other terrorists, who has no plan whatsoever to make us safer."