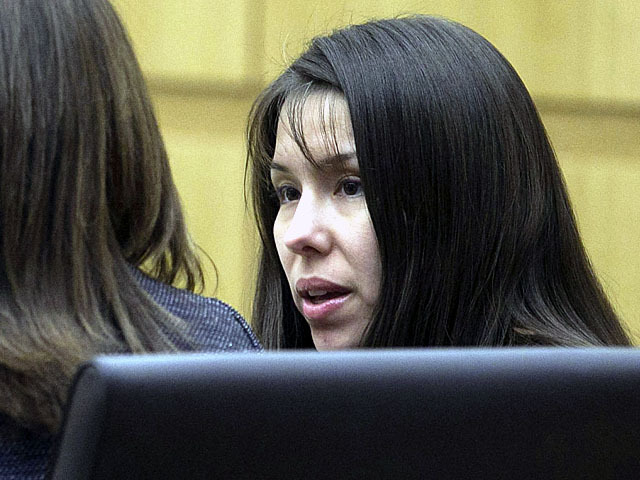 (CBS) PHOENIX - A medical examiner described how Travis Alexander's body told the story of his horrific murder in a Phoenix courtroom Tuesday, allegedly at the hands of his ex-girlfriend, Jodi Arias.

Dr. Kevin Horn, the Maricopa County Medical examiner who did the autopsy on the former motivational speaker, described a brutal attack that the prosecution says consisted of first, a stab wound to the chest, which over time could have been fatal. After Alexander was stabbed, the medical examiner says he was shot in the face and lastly, he had his neck slit from ear to ear, which was his cause of death.

This was all allegedly inflicted by the 32-year-old Arias, Alexander's one-time girlfriend, who the state contends killed Alexander in a volatile rage of jealousy in June 2008 at Alexander's Mesa, Ariz., home.

The couple met at a conference in Las Vegas in 2007 and quickly entered into a stormy relationship. The state argues that Arias became jealous on several occasions during their romance, as evidenced in the thousands of emails and instant messages the two exchanged.

Prosecutors argue Arias went to Alexander's home June 4, 2008, intent on killing him after learning he planned to take a trip to Mexico with another woman. Arias claims she ended their relationship, but the two continued to carry on a sexual affair.

Arias has admitted to killing Alexander, but her defense team will argue that she was abused and controlled by Alexander, who was a devout Mormon, but allegedly a "sexual deviant," according to the defense.

Yesterday, Arias' attorney, Jennifer Willmott, questioned the medical examiner's testimony about the way in which he now believes Alexander was murdered. Willmott implied that the state's original theory was that Alexander was shot first and then stabbed.

Gruesome crime scene photos of the inside of Alexander's home were also shown to the jury Tuesday. A bloody palm print physically cut out of the wall was shown in court. The print apparently had both Alexander and Arias' blood mixed in it.

Arias cried at the sight of the photos.