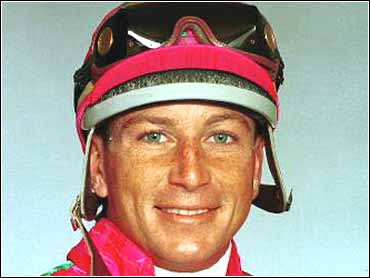 Jockey Chris Antley died of an overdose of multiple drugs and injuries found on his body were probably the result of a fall while under the influence, the county coroner's office said Thursday.

Hours after the toxicology reports were released, Antley's wife, Natalie Jowett, gave birth to the couple's first child on the East Coast. She named the girl Violet.

Antley, a two-time Kentucky Derby winner, was found dead Dec. 2 in his Pasadena home and police opened a homicide investigation because of the circumstances including what was described as severe trauma to his head.

"The lacerations were caused by him perhaps falling down and being under the influence," coroner's spokesman Scott Carrier said. "No foul play is suspected and the Pasadena Police Department concurs."

Police Cmdr. Mary Schander said the case has been reclassified as an accidental death. "We are bringing closure to the case," she said.

Toxicology testing found evidence of four drugs in Antley's system, including Clobenzorax, a weight-control drug not available in the United States; methamphetamine, Tegretol, an anti-seizure medication; and Paxil, an anti-depressant.

It was the first time the Los Angeles County coroner's office had seen Clobenzorax, Carrier said.

"We understand it's pretty well known among the jockeys," he said.

Antley, 34, had well-publicized struggles with his weight, substance abuse and depression.

"He was a mess," said Anderson. "He had a bipolar problem to begin with and the drug addiction on top of it, that's just sad."

Antley's wife, whom he met when she interviewed him as a field producer for ABC Sports, was in New York at the time of his death.

Antley had a drunken-driving arrest in July and a methamphetamine arrest in September. It was his wife who had become so concerned about Antley's condition by the end of the year that she asked his brother, Brian, to go to California to see him.

Brian Antley arrived on Dec. 2 and found his brother's body in his home near the Rose Bowl.

Timothy Wyman Tyler Jr., described by police as an Antley associate, was arrested a short time later on three outstanding warrants involving drugs and driving under the influence. Police, however, never described Tyler as a suspect in Antley's death.

Antley, who stopped riding in March because of his ballooning weight, won the Kentucky Derby aboard Strike The Gold in 1991. He won the race again in 1999 with Charismatic.

He and Charismatic came within a race of winning the Triple Crown but the horse suffered a career-ending leg injury while finishing third in the Belmont Stakes.

Just past the finish line, Antley jumped off the horse and held its injured leg until veterinarians could arrive. Owner Bob Lewis credited Antley with savin Charismatic's life.

That scene proved to be one of the most captivating images from racing in 1999.

Antley returned to the track after knee surgery at end of that year but only rode for another 2 1/2 months before his weight spiraled out of control again.

He finished second in his final race at Santa Anita on March 19.

Antley's career had been interrupted by frequent personal battles. He lost his New York jockey's license in 1988, when he tested positive for cocaine and marijuana.

Antley, a high school dropout from Elloree, S.C., began his career in New York, and was the nation's leading rider in 1985 with 469 wins. He was the first jockey to win nine races in a single day, accomplishing that on Oct. 31, 1987, with mounts at Aqueduct and the Meadowlands.