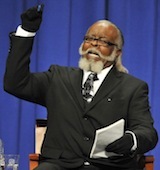 Democrat Andrew Cuomo and Republican Carl Paladino may be the only two candidates in New York that polls suggest have a plausible chance to win the governorship, but it was Jimmy McMillan who stole the show at last night's debate with a simple message: Rent is too damn high.

McMillan, a former postal worker and perennial candidate in New York (his party is called the "Rent Is 2 Damn High" party) who sported black gloves and memorable facial hair, hit that note over and over again at the debate. He did get off message once: Asked about gay marriage, he said he supports it - and if you want to marry a shoe, he's fine with that too.

Here's how McMillan, a self-described karate expert, explained the gloves after the debate, according to the New York Daily News: "I'm a war vet. Don't forget I was in Vietnam for two and half years and I have three Bronze Stars, but the chemicals of Agent Orange -- dioxin and a lot of other chemicals mixed up -- I would get sick. When I get home tonight, I know I'm not going to be able to breathe if I take them off. It could be psychological, I don't know, but I just put em on and wear them anyway."

McMillan has an amazing website and also records songs to make his case:

Crying Out Loud by maxread

McMillan was not the only longshot candidate to put in a memorable appearance at the debate: Manhattan madam Kristin Davis, who became famous as a result of the Eliot Spitzer scandal, is running on a platform of legalizing marijuana and casinos. Asked about the Metropolitan Transit Association, which runs the New York subway and bus system, she quipped: "The key difference between the MTA and my former escort agency is that I operated one set of books and my former agency delivered on-time, reliable service."

As for Cuomo and Palidino, they put in solid, if unmemorable, performances: Bad news for Paladino as he works to make up a serious deficit in the polls.