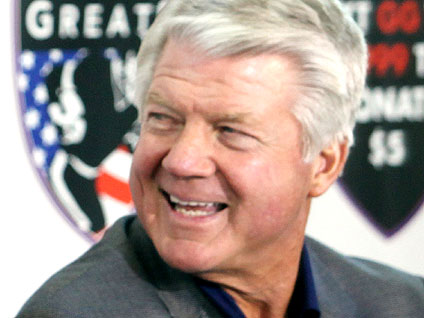 That's the nagging question today amid numerous published reports that the 67-year-old former Dallas Cowboys coach will join the 21st season of "Survivor: Nicaragua" among a group of contestants competing through challenges to gain immunity from being banished.

PICTURES: "Survivor" Through The Seasons

The Dallas Morning News noted that Johnson "will be one of the oldest contestants to ever appear on the show."

Age status aside, it's unusual for a contestant with so much "celebrity" stature to be featured on this reality competition.

This isn't "Celebrity Apprentice" or "Dancing With The Stars." Celebrity could actually hamper a contestant on "Survivor" because so many others know his true back story. It also raises the question of whether other celebs will be on the broadcast this fall?

Lori DelliColli, publicist of "Survivor," tells Celebrity Circuit that "we cannot comment on casting speculations." She said the network will be "announcing the cast later in August."

Johnson retired from coaching in 1999 after winning two Super Bowls with the Cowboys. In TV, Johnson worked for Fox as a pregame show analyst. He is expected to be done filming the show in time to resume his duties with the network, USA Today reported.

For now, it's anyone's guess whether he will seen at any Tribal Councils.