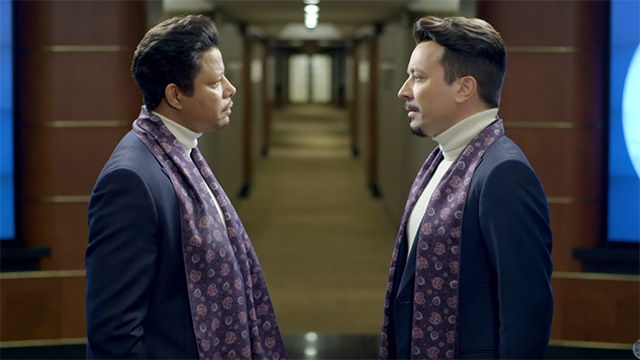 Fox's hit hop-hop drama Empire returns for its second season on Wednesday, but fans got a "sneak peek" on Tuesday's "Tonight Show" as host Jimmy Fallon skewered the soap in an epic parody.

Done up in one of Lucious Lyon's iconic suits, the late night host dubbed himself "Juicy Jim, head of the Tonight Show 'Jimpire'" as he wondered who on his staff was worthy of taking over the show between Roots bandleader Questlove and head MC Tariq.

"I might not be around forever, what with my finger being in the condition that it is," Fallon speculated to his team, poking fun at the freak accident that seriously injured his left ring finger earlier this summer. "Who knows what could happen tomorrow. I could stub my toe. I could bite my tongue. I could burn the roof of my mouth eating a hot microwave pizza."

Fallon's "Cookie" counterpart was, of course, "Tonight Show" sidekick and announcer Steve Higgins, a.k.a. "Higgie," who was "back from hiatus" to mock Juicy Jim and his "Boo Boo Kitty" injured finger.

Real-life "Empire"star Terrence Howard even made an appearance in the two-part parody, running into Fallon in the Tonight Show hallway in a very meta moment.

"I wanted to talk to you about something serious," Howard deadpanned, dressed in the same Lucious Lyon getup as Fallon. "I know y'all do these parodies on your show. Don't do one of 'Empire.'"

And Emmy nominee Taraji P. Henson showed up to claim her character's spot as the baddest bitch in town.

"I should call you Little Debbie," Henson as Cookie sneered at "Higgie" before beating him to the ground. "'Cause you are one fake-ass Cookie."

Ultimately, "Juicy Jim" had yet another dramatic twist up his sleeve. After Tariq rapped the opening monologue and Questlove revealed his deep, dark secret (he's bald!), the head of the "Jimpire" revealed that none of them would be taking over.

"I decided that my legacy can only be entrusted to one person," he announced dramatically, "Ladies and gentlemen I give you the true heir to the Tonight Show on NBC."

And the winner is...Donald Trump!