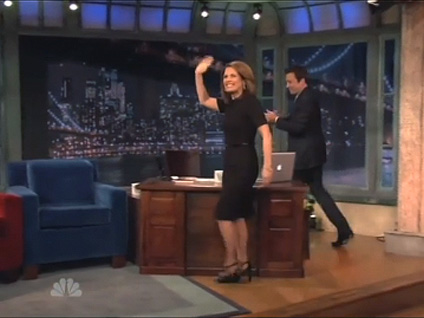 Republican presidential candidate Michele Bachmann emerged for an interview on "Late Night with Jimmy Fallon" Monday night to the song "Lyin' A** B*tch" by the band Fishbone, Spin Magazine reports.

It's unlikely that Bachmann, who smiled and waved as the song was played, recognized what was happening - though the (wordless) music certainly sounded out of place. (You can see and hear it at left, via Politico.) The song came from the show's official band, The Roots, which has performed at rallies on behalf of President Obama.

Before the song was played, The Roots' drummer Questlove tweeted, "aight late night walkon song devotees: you love it when we snark: this next one takes the cake. ask around cause i aint tweeting title."

He later retweeted reactions, including "@questlove huge ups to the fishbone tune for Bachman on jimmy tonight. perfect entry song for her!"

The Bachmann campaign did not respond to a request for comment.

Rep. Nita Lowey said the song choice was insulting and inappropriate as she called on The Roots, Jimmy Fallon and NBC to apologize.

"I do not share Michele Bachmann's politics, but she deserves to be treated with respect. No female politician - and no woman - should be subjected to sexist and offensive innuendo like she was last night," the New York Democrat said in a prepared statement.

UPDATE: Fallon Tweeted this Tuesday evening: "I'm honored that @michelebachmann was on our show yesterday and I'm so sorry about the intro mess. I really hope she comes back." He did not mention the incident on the air Tuesday night, and despite the "@Questlove is grounded" Tweet, the Roots drummer appeared on the show.