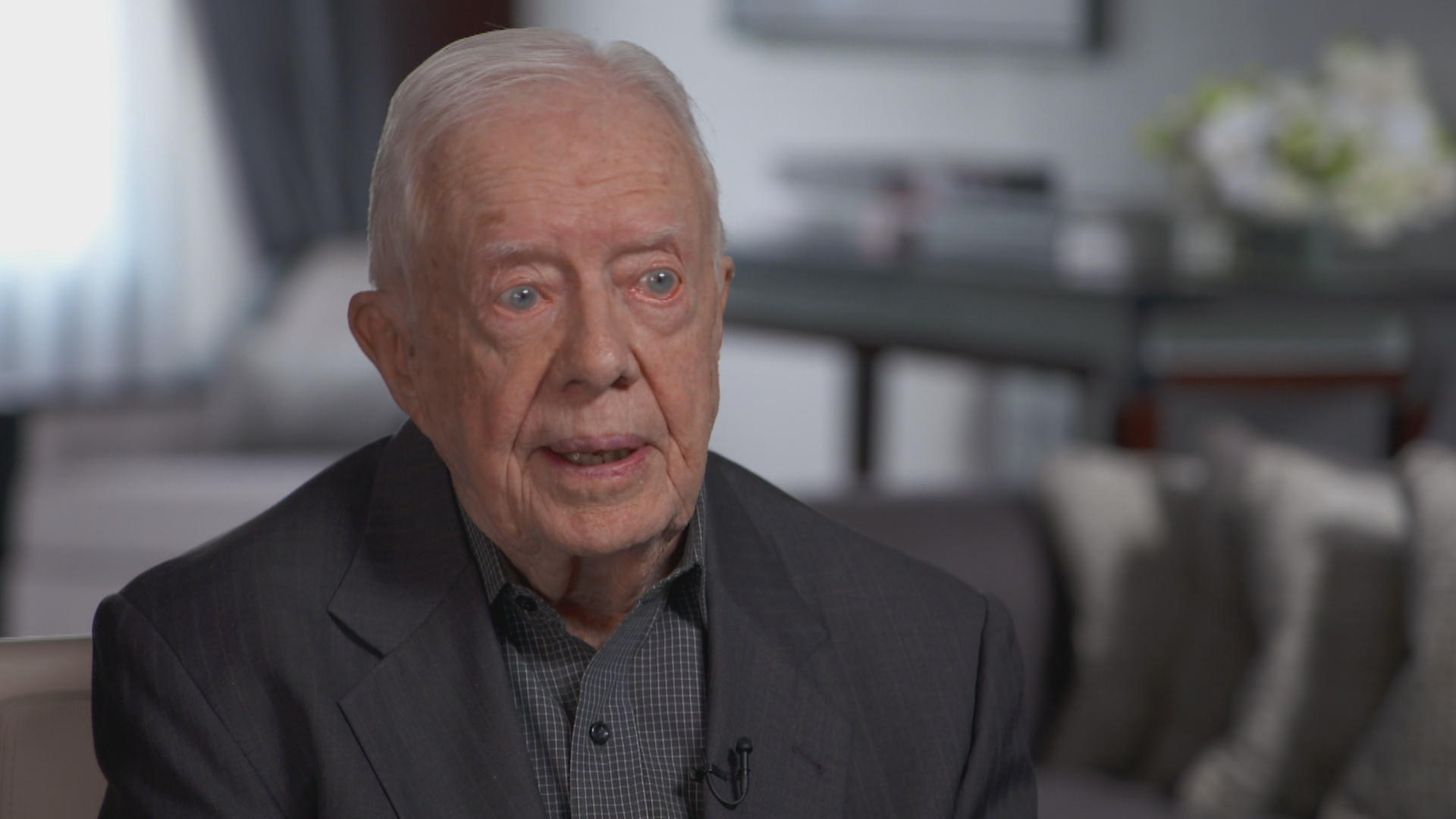 Carter told told "CBS This Morning" co-host Norah O'Donnell that  he has offered to help President Trump and hopes Mr. Trump will be "successful" if he sits down with North Korean leader Kim Jong Un to discuss denuclearization.

"If President Trump wanted me to help in any way, I would be glad to do that," Carter said.

The former president also discussed Russia and said Mr. Trump has not taken a hard enough stance on Russian meddling in the 2016 U.S. presidential election.

"In the last few weeks, I think President Trump has shown, for the first time, a willingness to stand up against the policies of Russia. I think he's — I think he could go a little bit further along, but I think he's begun to change his attitude," Carter said.

Now he's out with his 32nd book, "Faith: A Journey for All," published by Simon & Schuster, a division of CBS. Carter said he thinks it will be his last book.

"But I thought the last one was my last one. And so this has been the most difficult book I've ever written, just about faith, you know, just a simple title. Because there's so many different meanings of faith," he said.

JIMMY CARTER: I've been there, I've spent about 20 hours in detailed talks with the top leaders of North Korea. I think I understand what the North Koreans want. … And what the leaders want is a guarantee that can be confirmed that the United States will not attack North Korea preemptively, as long as North Korea stays at peace with its neighbors.

CARTER: I'm glad to hear that, and hope he'll be successful. I pray that he will. I've-- I've offered to President Trump directly, on two occasions, since he's been to office, that I would be glad to help in any way when-- to go to North Korea if needed. I don't wanna go if I don't have to. I'm, as you said, over 93 years old. But I would be glad to do whatever he wanted me to do.

O'DONNELL: You mean hold, like, a preliminary meeting with Kim Jong-un before President Trump--

CARTER: Well, whatever-- whatever the president wants. It's-- it's against the law and against my principles to intercede without permission from the president. But if-- if President Trump wanted me to help in any way, I would be glad to do that.

O'DONNELL: Russia once again back in the news, and today President Trump announcing that he would expel 60 Russians from the U.S. over that poison attack in Britain. … Has President Trump taken a hard enough stance against Russia's meddling?

CARTER: I don't think President Trump has. One reason, I think the main reason is that he doesn't want to admit in any way that the Russians were influential in his election. He wants to give that credit directly to the American people. … And in the last few weeks, I think President Trump has shown, for the first time, a willingness to stand up against the policies of Russia. I think he's-- I think he could go a little bit further along, but I think he's begun to change his attitude.

O'DONNELL: I'm almost embarrassed to ask this question, but you know, there's so many problems facing America, and people in need, and yet there is an entire discussion about this current president and a alleged affair he had with a adult film star. What do you make of that?

CARTER: It'll help the Democratic Party in 2018, and perhaps in 2020. And will be damaging to President Trump. I think most people want a president-- whom they trust to tell the truth always, and who has some basic moral values, including loyalty to his own wife. So in a way, it'll be damaging. But I don't think it's gonna have nearly as much effect as it would've had, say, 20 years ago.

President Carter was in New York Monday to promote the release of his latest book, a reflection on faith and its impact on our lives.

O'DONNELL: What number book is this?

O'DONNELL: Your 32nd book. I know you're not traveling as much, but--

O'DONNELL: But it seems like you're hardly slowing down.

CARTER: Well, I'm going to slow down. Rose and I both, since Rose has been ill, she's past 90 now, and so it's time for us to back away from some things.

O'DONNELL: I know you have had melanoma. And congratulations on being in remission now for more than two years?

O'DONNELL: And what did the doctors say about your prognosis?

CARTER: At this point the prognosis is good. But I'm not overconfident, but I'm a lot more confident than I was for a while, and thankful.

O'DONNELL: I know when you announced your diagnosis in 2015, you said you were surprisingly at ease. And in the book you write that, "We thought that I had only a few weeks to live, and Rosalynn and I began making plans for my death." What plans have you made?

CARTER: Well, I called all my family together and told them that I was going to die quite soon. And I shared that information with the leaders of the Carter Center, where Rose and I spend a lot of our time. And so I was prepared to go, but things turned out for the better.

O'DONNELL: But that's an unusual thing, to prepare to say goodbye and then be granted a great deal more time.

CARTER: I know. That's true, well, I've been very fortunate in many ways.

O'DONNELL: So do you think this is your last book?

CARTER: I think so, but I thought the last one was my last one. (LAUGH) And so this has been the most difficult book I've ever written, just about faith, you know, just a simple title. Because there's so many different meanings of faith.

O'DONNELL: Right, you're talking about more than just faith in God.

O'DONNELL: Are you concerned that there's a lack of faith in many of these?

CARTER: Yeah. We've lost a lotta faith in each other. And the eagerness to accommodate different opinions. A lot of Americans have lost faith in themselves, they've lost faith in democracy.

O'DONNELL: Why do you think that faith is being challenged?