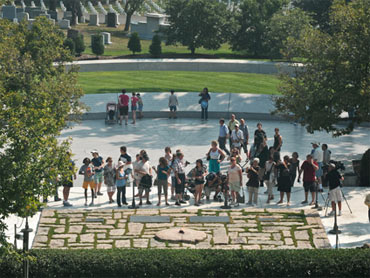 Unfortunately those and words from Kennedy's other speeches -- inscribed on a granite wall near Kennedy's tomb -- aren't as clear as when the President's iconic memorial was erected in 1965. So, on Thursday workers began to restore the legibility of the inscription, reports CNN.

John Everett Benson, the original engraver, was on site to assist restorers.

The restoration is being paid for by the Knights of Columbus. Kennedy, who was the nation's first Catholic president, was a member of the Catholic organization from 1946 until his November 1963 assassination.

The project will cost less than $10,000, according to a Knights spokesman.

Members of the group first noticed the poor condition of the engraving back in August, when they attended a wreath-laying ceremony at the Tomb of the Unknown.

"We all looked at the wall and we could not read it," Knights spokesman Patrick Korten told CNN.