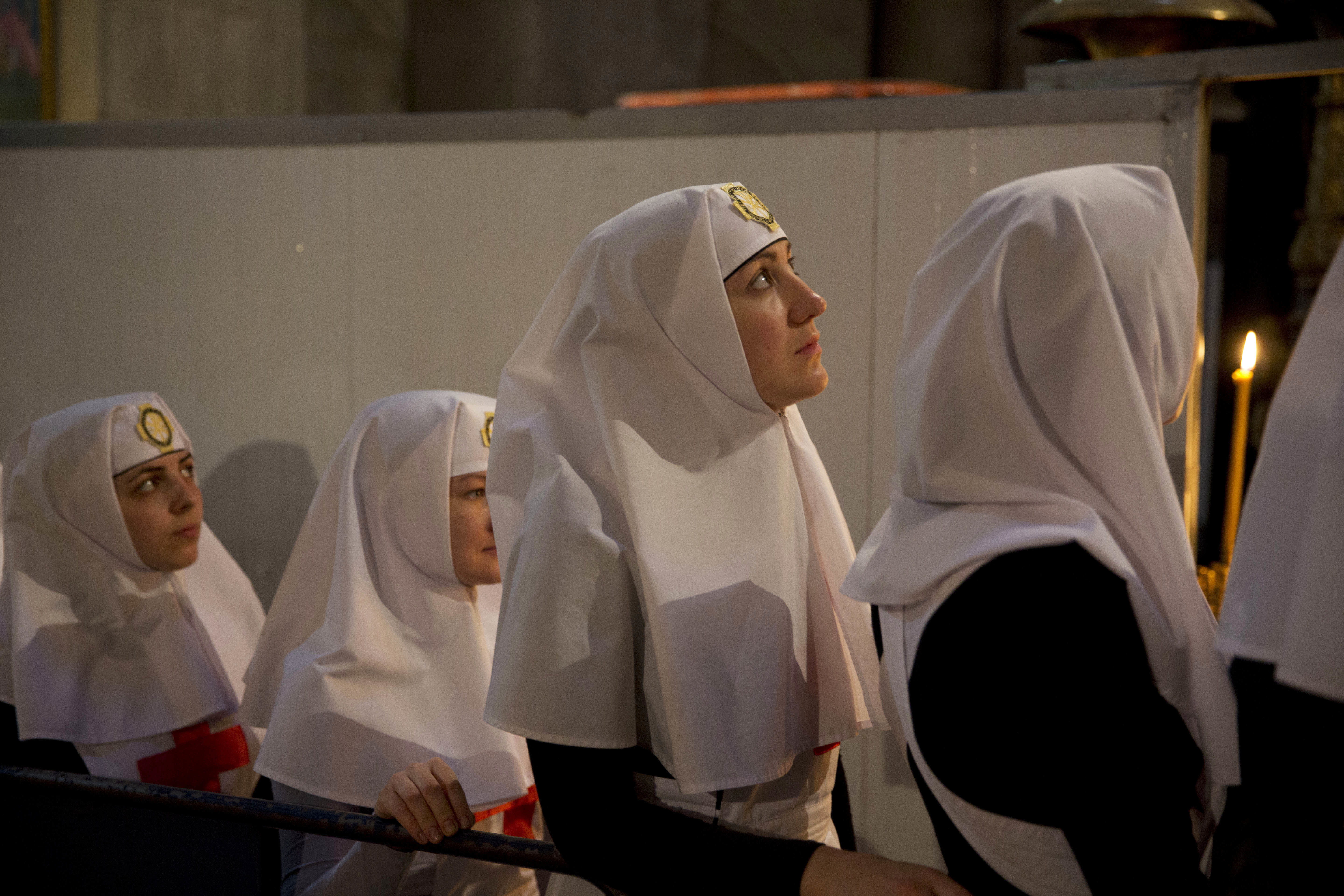 JERUSALEM -- A team of experts began a historic renovation on Monday at the spot where Christians believe Jesus was buried, overcoming longstanding religious rivalries to carry out the first repairs at the site in more than 200 years.

The project is focused on repairing, reinforcing and preserving the Edicule -- the ancient chamber housing Jesus' tomb in Jerusalem's Church of the Holy Sepulchre. It is the first such work at the tomb since 1810, when the shrine was restored and given its current shape following a fire.

An ornate structure with hanging oil lamps, columns and oversize candlesticks, the Edicule was erected above the spot where Christian tradition says Jesus' body was anointed, wrapped in cloth and buried before his resurrection. It stands a few hundred yards from the site of Jesus' crucifixion.

With its stone staircases, gilded ornamentation and many dark chambers, the church is one of Christianity's holiest shrines. But that hasn't stopped clerics from engaging in turf rivalries over the years.

The Roman Catholic, Greek Orthodox and Armenian churches are responsible for maintaining separate sections, and each denomination jealously guards its domain. While the clergymen who work and pray at the church generally get along, tensions can rise to the surface. In 2008, an argument between Greek Orthodox and Armenian monks erupted into a brawl.

This time, though, the clergymen put aside their differences -- a reflection of the dire need for the repairs. Last year, Israeli police briefly shut down the building after Israel's Antiquities Authority deemed it unsafe, prompting the Christian denominations to join forces.

"We equally decided the required renovation was necessary to be done, so we agreed upon it", said the Rev. Samuel Aghoyan, the top Armenian official at the church.

An Associated Press team had exclusive access to the site as the work began late Monday, carried out by a team of nine Greek experts who have done similar restoration work on the Acropolis as well as to Byzantine churches throughout the Mediterranean.

As a group of nuns looked on, the sound of clanking tools filled the vast arched space where conservators and restoration experts began chipping away at mortar between marble slabs. Using cotton swabs dipped into a solution of liquid soap and water, one expert scrubbed away centuries-old layers of wax and carbon dioxide. Another airbrushed the dirt as the work progressed.

Antonia Moropolou, an architect at the National Technical University of Athens, which is supervising the renovation, noted the intricacy of the historic effort.

"Nobody envies this responsibility and challenge," she said. "Because, it is a challenge to work here in this ambient of an open monument visited by thousands of people daily."

Moropoulou said the tomb is stable, but needs urgent attention after years of exposure to environmental factors like water, humidity and candle smoke.

"The marble and stone slabs have developed, due to the stresses, some deformations," she said. In addition, the structure needs to be protected from the risk of earthquake damage.

Even an iron cage erected around the Edicule by British authorities in 1947 cannot bear the stress. "So another solution is needed," Moropoulou said.

The project will bolster the structure by, among other things, replacing the mortars and strengthening the columns. It is expected to take eight to 12 months, during which time pilgrims will be able to continue visiting the site.

Some of the work will be done in the early morning hours or late at night, when the church is closed. This quiet atmosphere will make it easier for experts to concentrate on the delicate task and help avoid disruptions for the thousands of pilgrims and tourists who visit each day.

The project will cost about $3.3 million, said Theophilos III, the Greek-Orthodox patriarch of Jerusalem. Each church is contributing funds. In addition, Jordan's King Abdullah made a personal donation. Jordan controlled Jerusalem's Old City until the 1967 Mideast war, and the kingdom continues to play a role safeguarding Muslim and Christian holy sites.

Despite the sometimes tense relations between the denominations, the tomb served as a potent symbol of Christian unity when Pope Francis and the spiritual leader of the world's Orthodox Christians, Ecumenical Patriarch Bartholomew I, prayed together there in May 2014.

Likewise, today's restoration is bridging centuries-old divisions by being carried out in the name of all three major denominations that share possession.

In a show of unity, on May 20 clerics from the three denominations posed and shook hands in front of the scaffolding erected around the tomb ahead of the work.

The church, one of the world's oldest, was built in 325 A.D. by the Roman Emperor Constantine. That structure was destroyed in 1009 by Muslim Caliph al-Hakim. A 12th-century restoration by the Crusaders gave the Holy Sepulchre its current appearance, while in 1808 a fire all but destroyed the Edicule.

In 1852, the Ottoman authorities then governing the Holy Land provided a framework for resolving disputes inside the church. They put into effect the "status quo," a set of historic laws and power-sharing arrangements that rigidly regulates the denominations' activities inside the Holy Sepulchre.

The Rev. Athanasius Macora, a Franciscan monk who represents the Catholics at the inter-church commission that negotiates disputes at the Holy Sepulchre, said the renovation might have been more ambitious if not for the status quo rules.

"I personally would have liked to maybe contemplate some alternative to simply restoring the current structure. But because the status quo is so conservative in its nature . we had to more or less accept the fact that there would be no change whatsoever to the current structure, and it would be restored as it is now," he said.

Still, for pilgrims like Italian Claudio Pardini, the restoration is "an important sign" that all of the Christian churches are getting together to preserve their faith's traditions.

"It's good to take care of our churches so that we can leave the next generations a sign, something to visit," he said. "Because Christ isn't an idea. He's a story."