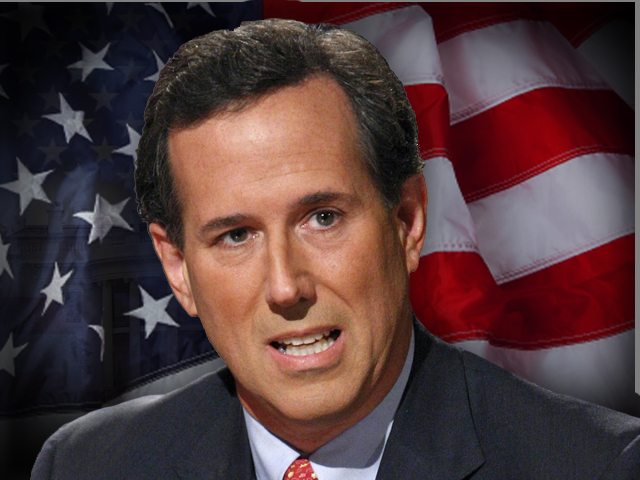 KEENE, N.H. - The Christian values candidate in the Republican field is getting his baptism by fire in New Hampshire.

As he campaigns among the state's notoriously grumpy electorate, presidential candidate Rick Santorum has spent as much time arguing with prospective voters over same-sex marriage as he has asking them for their support. In the most recent flare-up on the campaign trail, the former U.S. senator from Pennsylvania was challenged Friday about his opposition to gay rights and President Obama's health care plan.

"I have a question and it's about gay people," asked the first man to be called on at a Santorum town hall meeting here today. "They are children of God too. Do they have the right to marriage? Do they have the right to serve in the military? Should they be treated like any other citizen? Under your presidency, would you protect their rights or would you diminish them?"

Santorum answered that he doesn't believe marriage or serving in the military are inalienable rights, but "privileges," adding, "It's not discrimination not to grant privileges."

A few people jeered him.

At another point in the meeting, a woman who said she had a college-aged son with a preexisting medical condition asked Santorum whether he thought it was right for insurance companies to discriminate against her son. The candidate did not address her question directly, but rather discussed market-based solutions to the lack of insurance coverage for some Americans and said Obama's health care plan has not fixed the problem. Some people objected to his answer.

Santorum was interrupted several times during the nearly two-hour event. The local fire chief asked about 50 people to leave the overflow crowd in the basement of the Keene Public Library, spurring further complaints from the audience. At another point, a man shouted "Wall Street got bailed out! We got sold out!" And a band of supporters of rival Republican candidate Ron Paul took to singing carols in an adjoining room.

Things didn't get easier for Santorum as the day wore on. At a town hall meeting at a college prepatory school in Dublin, students asked him repeatedly about gay marriage. At one point, Santorum said, "I think I answered that question. I'm not too sure I can add anything more to it."

Santorum offered the crowd in Dublin a more passionate version of his opposition to same-sex marriage than he had earlier in the day.

"You're robbing children of something that they need, they deserve, they have a right to. They have a right to be know and be loved by their dad or their mom," he said. "That's what marriage is about. It's not about two people loving each other.

"There's nothing hateful about that. There's something true about that."

Another young woman pressed Santorum on the topics of contraception and abortion rights, and what would happen to pregnant women who could not take care of their children. Santorum, a Roman Catholic, said he and his wife do not use contraception in accordance with their faith, but that he never advocated a legal ban on contraceptives.

"It is my moral judgment but it is not one that I feel like should be, or will be, imposed on anyone," he said. "I have said repeatedly that I would not vote for banning contraception. That is an individual decision. Contraception can and should be made available."

Later still, a woman holding a Bible asked how his "war mongering" reconciled with his faith."Jesus said to love your enemies and feed them, not blow them up!" she said.

A day earlier, on Thursday, Santorum tangled with gay rights supporters at a college convention in Concord, defending his opposition to liberalizing marriage laws by raising the specter of polygamy. "What about three men?" he asked, challenging audience members who sharply questioned his opposition to same-sex marriage.

The comment evoked memories of the ex-Pennsylvania senator's controversial statement to the Associated Press in 2003 in which he associated gay sex with incest and bestiality.

The exchanges are a sign that Santorum's cultural conservatism message may not play as well with New Hampshire's more moderate and independent voters as it did with Iowa's social conservatives, who make up the vast majority of the state's caucus-goers. Santorum has made his faith and positions on social issues a central theme of his campaign. One of his rivals, former House Speaker Newt Gingrich, stressed his opposition to liberal judges in Iowa but has put more emphasis on the economy since the campaign has moved to New Hampshire, which holds the next presidential primary on Tuesday.