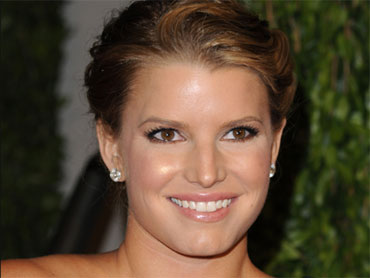 According to an Entertainment Weekly report, the singer and reality TV star has met with "Idol" execs in the hopes of joining the show's judging panel.

"I'm not sure whether her people approached "Idol," or if it was the other way around," said an insider, who also added that the "Newlyweds" star is just one of "dozens" of candidates who have reportedly been considered for the job.

Simpson joins a list of rumored replacements that include Chris Issak, Harry Connick Jr., Jamie Foxx, and Bret Michaels, among others.

Justin Timberlake and Elton John's names surfaced briefly, but both their reps were quick to deny the rumors.

Earlier this week, Nigel Lythgoe was rumored to make a dramatic return as executive producer. Recent published reports speculate that his return will also bring major changes to the remaining judging panel.

Nigel Lythgoe May Return for 10th Season of "Idol"

In a slip of the tongue Wednesday night on "So You Think You Can Dance," where he is both producer and a judge, Lythgoe mistakenly referred to the dance show as "American Idol."

Although reps from both Simpson and Fox have yet to confirm or deny the rumors, TMZ reported that the network is expected to reveal Cowell's replacement sometime in September.