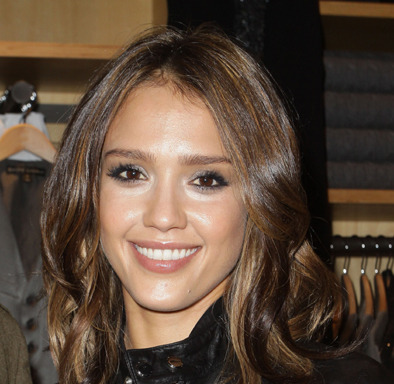 NEW YORK (CBS) Jessica Alba may be viewed by many as one of the most beautiful stars in Hollywood, but the 29-year-old actress insists that she doesn't think so.

"Every actress out there is more beautiful than me," she tells British GQ in its November issue.

As the cover girl, Alba, who stars as the leading lady in Robert Rodriquez's "Machete," shows off a slim physique while sporting a white one-piece swimsuit.

But despite her alluring cover, the mother of one reveals that her body has changed after the birth of daughter, Honor Marie.

"My breasts are saggy, I've got cellulite, my hips are bigger," she says.

While she admits that she has "never been comfortable" showing off her body and being a sex symbol, Alba has now come to terms with it.

"I used to have anxiety attacks before I did the photo shoots. I'd never worn high heels or even dresses before I did movies . . . I wasn't even allowed to show my stomach in my house when I was growing up -- my parents were very strict. But this is the business I'm in, and it's made me a lot of money, so I can't complain."