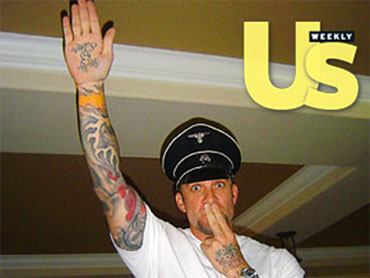 Jesse James may think twice now when posing for a picture.

A photo of the "Monster Garage" reality TV star posing as a Nazi has surfaced on the Internet, adding to the media firestorm that already surrounds him.

In the image,TMZ reports, James is wearing a Waffen SS visor and giving the infamous "Heil Hitler" salute while placing the fingers of his other hand above his mouth to imitate Adoph Hitler's mustache.

One source tells People that James struck the pose during a party at his home for West Coast Choppers workers and others in 2005, before his marriage.

"The last thing Jesse is racist or anti-Semitic. The hat came from a dear lifelong friend who's Jewish, and James had even spent time on a kibbutz in Israel last fall learning metalworking techniques," another source tells People.

The controversial image comes after several allegations of infidelity, which started when Michelle "Bomshell" McGee, a tattoo fetish model and stripper, claimed to have had an 11-month affair with James.

"Everything he does is for shock value," says Ron Simms, a veteran bike designer who was a former mentor to James. People reports that Simms had a falling out with James in 2005.

Radar Online reports sources saying that Sandra Bullock "is ending the marriage" and that she's seeking to get custody her stepdaughter Sunny, 6.

Bullock's representatives have denied that the star is seeking custody.

James' represetative has said he is in treatment for "personal issues." Both Radar Online and US Weekly are reporting that he has entered a rehabilitation facility for sex and drug addiction,