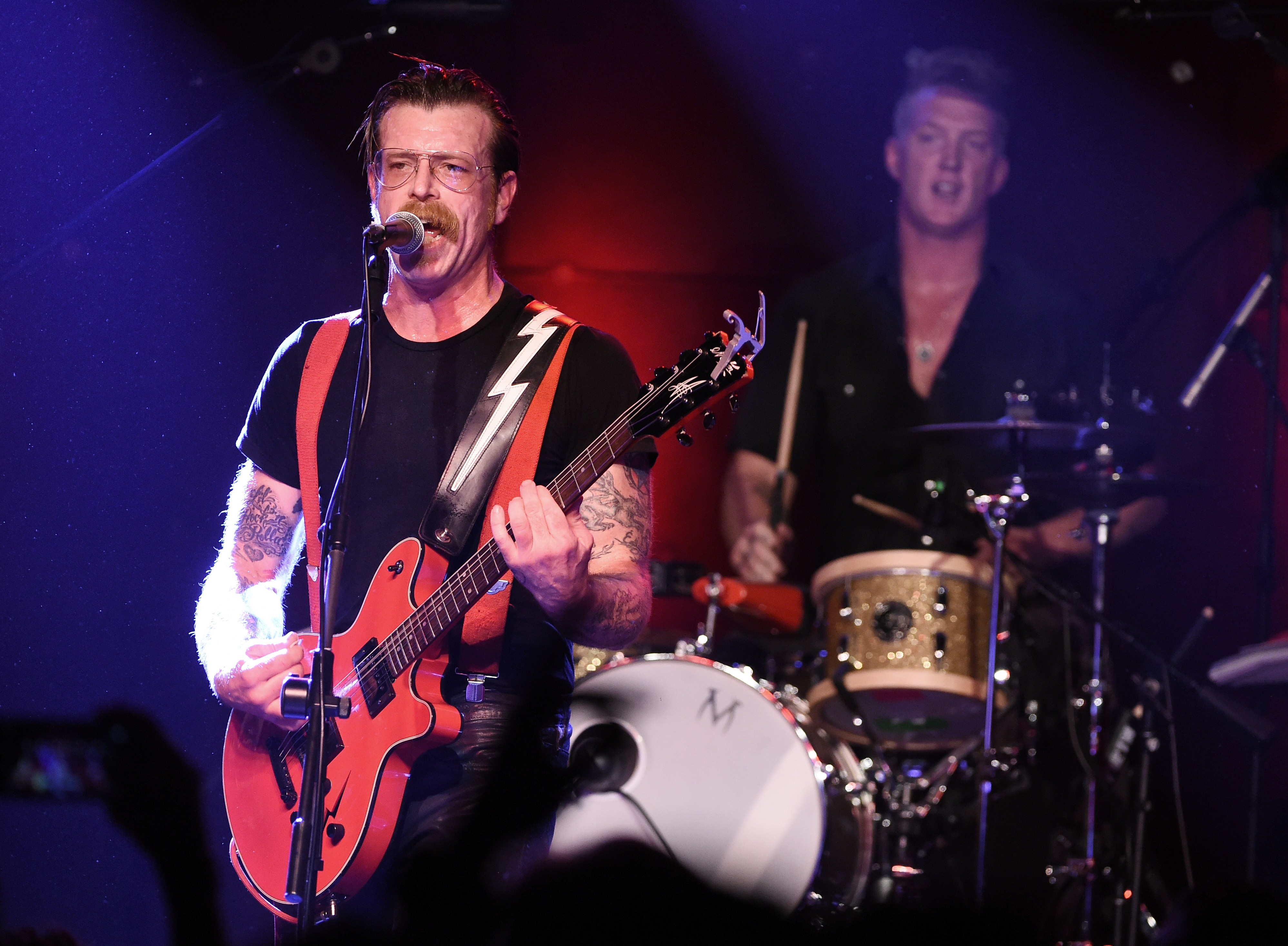 STUDIO CITY, Calif. -- The frontman of the band Eagles of Death Metal (EODM) has called out the survivors of the February massacre at a Florida high school who marched for gun control over the weekend, using his experience as a shooting survivor to call the youths "pathetic," CBS Los Angeles reports. Jesse "The Devil" Hughes took to Instagram over the weekend to criticize those who participated in Saturday's nationwide "March for Our Lives" protests.

The EODM singer and his bandmates survived a 2015 terrorist attack at Paris' Bataclan theater that left 89 concertgoers dead.

In a post that has since been deleted, Hughes wrote, "As the survivor of a mass shooting I can tell you from first-hand experience that all of you protesting and taking days off from school insult the memory of those who were killed and abuse and insult me and every other lover of liberty by your every action."

"Long Live Rock'n'Roll and may everyone of these disgusting vile abusers of the dead live as long as possible so they can have the maximum amount of time to endure their shame ... and be Cursed ...," Hughes continued.

Hughes, who also goes by the moniker "Boots Electric," was apparently addressing the survivors of the shooting at Marjory Stoneman Douglas High School in Parkland, Florida, on Feb. 14.

One of the posts, screen-grabbed by a Twitter user, shows a doctored photo of Parkland survivor Emma González ripping up the U.S Constitution. That photo, which has since has gone viral, was quickly pointed out to be a fake.

The doctored photo of Gonzalez was posted with two images that seemed to equate voluntarily giving up one's guns to prevent gun violence, to castrating oneself to prevent rape.

The site Consequence of Sound posted a screen-grabbed image of yet another photo of a pro-Second Amendment patch from a deleted post.

Hughes, who formed EODM with his childhood friend and Queens of the Stone Age frontman Josh Homme, has been criticized in the past for his conspiratorial views. Months after the attack at Le Bataclan, Hughes intimated the shooting that occurred during his concert on Nov. 13, 2015 was an "inside job." He later apologized for the remarks.

In a 2016 interview with right-wing "godfather of hipsterdom" and Vice co-founder Gavin McInnes, Hughes said, "A day after, at the stadium, Muslims booed the moment of silence and we barely heard about it in the press. I saw Muslims celebrating in the street during the attack. I saw it with my own eyes. In real time! How did they know what was going on? There must have been coordination."

Hughes and the band were featured in the 2017 documentary about the massacre "Nos Amis," named after their 2016 tour, which included an appearance with U2 at another venue in Paris.

Hughes was known for his conservative and often controversial views before the Bataclan massacre remarks. In the documentary "The Redemption of the Devil," Hughes espouses many of his right-leaning views on his online radio show. A self-professed Christian and minister ordained by the Universal One Church, Hughes has given sermons preaching Jesus' love and "promoting the sanctity of the Second Amendment," according to a 2015 Grantland exposé.

Months prior to the massacre, in an interview with an Italian online rock magazine, Hughes said the following:

"I would rather believe in a magic dude than magic monkeys. Jesus Christ is the one that teaches us to be the most compassionate. No other religious doctrine in the world that tells you that the greatest love anybody can have is that you give up your life for your own friends -- no one does. You can blow yourself up to spite Christians or you can blow yourself up to piss off America -- there's nothing noble about that, but the whole world changed through Jesus Christ. Sometimes bad things were done in his name, but by imposters, and he f--g punishes them accordingly. It's probably gonna be hotter in hell for me than for y'all, but I'll never be the fool that's there and doesn't know why."

Below is the complete text of one of the since-deleted posts:

"Obviously….The best thing to do to combat chronic abusers and disregarders of the law(like the law against Murder) is to pass another Law' Genius" but before we pass this law we're going to denigrate the memory and curse ourselves by exploiting the death of 16 of our fellow students for a few Facebook likes and some media attention….and look how well civil rights abuses as it concerns firearms helped to protect me and my friends in Paris", This almost sounds like the plan of like a kid maybe like a high school student 1 Oh wait that's right…. The Whitney Houston song about letting the children lead the way wasn't actually had operating paradigm for life And when the truth don't line up with your b******t narrative just hold your breath and stamp your feet and refused to except it…. then take multiple days off of school playing hooky at the expense of 16 of your classmates blood 1 it might be funny if it wasn't so pathetic and disgusting As the survivor of a mass shooting I can tell you from first-hand experience that all of you protesting and taking days off from school insult the memory of those who were killed and abuse and insult me and every other lover of liberty by your every action Long Live Rock'n'Roll and may everyone of these disgusting vile abusers of the dead live as long as possible so they can have the maximum amount of time to endure their shame….and be Cursed…."