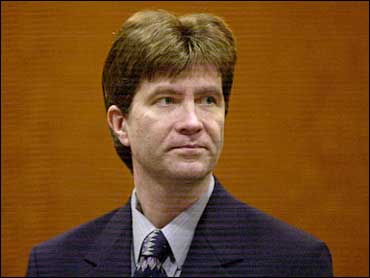 A man was convicted of killing his ex-wife hours after they and another woman were featured on a ``Jerry Springer Show'' episode about love triangles.

Ralf Panitz, 42, was found guilty of second-degree murder Tuesday night in the slaying of Nancy Campbell-Panitz, 52. Jurors, who deliberated for 18 hours over two days, also convicted him of violating a domestic violence order.

Panitz could face up to life in prison when he is sentenced in May.

Campbell-Panitz was beaten and choked on July 24, 2000, shortly after the airing of an episode of the Springer show featuring her being confronted by her ex-husband and his current wife, Eleanor. The show had been taped in May.

Prosecutors said they believe the killing was touched off by Panitz's anger at being barred by a judge from living in his ex-wife's house. The couple had been divorced since 1999 but continued living together off and on, even after Panitz secretly married Eleanor in March 2000.

Prosecutors won the convictions after a 10-day trial in which defense attorney Geoffrey Fieger, whose previous clients include Dr. Jack Kevorkian, presented a series of high-profile criminologists who testified there hadn't been a murder at all.

Fieger argued that Campbell-Panitz died from a heart attack suffered during a fight with someone, but not his client.

Fieger blasted jurors following the verdict, saying they ``made up evidence'' because none existed linking Panitz to the death.

Prosecutors, though, said 18 bloody footprints matched a shoe Panitz owned and his DNA was found under his ex-wife's fingernails. Detectives said Campbell-Panitz's face was so badly beaten she was unidentifiable to a deputy who had seen her earlier the same day.

Assistant Sarasota County State Attorney Charlie Roberts said he was satisfied with the second-degree murder charge. At one point, prosecutors had charged Panitz with that crime, but upgraded it under a Florida law which makes a killing accompanied by another felony first-degree murder.

Eleanor Panitz said the verdict would be appealed.

``I will never give up trying to see my husband is a free man because in my heart I do not believe he did this,'' she said.

The slaying capped a dysfunctional drama in which the German house painter bounced between his ex-wife and wife, often moving in with one the same day he dumped another.

The trio spent months filing a flurry of domestic violence allegations against each other and appeared on the Springer show episode titled ``Secret Mistresses Confronted,'' where the audience jeered as Campbell-Panitz was ridiculed as being ``fat'' and ``old.''