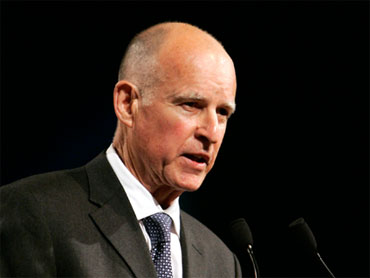 California gubernatorial candidate Jerry Brown has told a Jewish-rights group that he regrets recent remarks to a reporter in which he compared his rival's campaign tactics to Joseph Goebbels' Nazi propaganda.

"I'm sorry, I talked to the people at the Holocaust center and they completely understand," Brown said Tuesday in response to a reporter's question about the comments. The group he was referring to was the Los Angeles-based Simon Wiesenthal Center, his spokesman said.

Rabbi Marvin Hier, dean and founder of the Simon Wiesenthal Center, confirmed that Brown had called him the morning the blog appeared and they spoke for about 5 minutes. He said Brown, who he has known for 30 years, told him he regretted referencing Goebbels.

"He said that his remarks were taken out of context. He was complaining about, in his opinion, the constant blitz of attack ads that were coming from the other side," Hier said.

Sovern reported that he bumped into Brown while the candidate was jogging in the Oakland Hills.

Sovern said Brown told him he was concerned about Whitman's ability to spend an almost unlimited amount of money in the governor's race. Whitman, the billionaire former eBay CEO, has given her campaign over $90 million so far and plans to spend at least $150 million through November.

According to the blog, Brown said Whitman has the money to launch a pervasive smear campaign: "She'll have people believing whatever she wants about me."

Brown then compared that type of messaging ability to Goebbels.

"Goebbels invented this kind of propaganda. He took control of the whole world," Brown was quoted as saying.

Asked Tuesday if he regretted the remarks, Brown said: "I'll tell you this, jogging in the hills with sweaty strangers will no longer result in conversations. Mums the word."

Hier said Brown admitted he should not have used Goebbels' name.

"He regrets any misapprehension that was created by his remarks," Hier said. "He said he was jogging and he shouldn't have used it. He certainly wasn't saying Meg Whitman was Joseph Goebbels."

Hier said he was happy Brown had called. Earlier that morning, Hier had spoken out against the remarks during a Los Angeles radio interview.

"He said he regrets it and I take him at his word," Hier said.

Nina Grotch, the interim regional director of the Anti-Defamation League in San Francisco, said such remarks diminish the Holocaust and take away from it being a unique historic atrocity.

She said she's unaware if Brown has contacted her organization, which has branches in several cities, but was happy to hear he had at least reached out to another Jewish organization.

"Jerry Brown is an educated and smart man and I'm sure he knows these kinds of comparisons are inappropriate," she said. "It's always nice, however, to do a more public apology so people understand that he did take this seriously and understands it is potentially deeply offensive."

Brown has not officially apologized and spokesman Sterling Clifford told The Associated Press late Tuesday that Brown "is sorry they were upset."