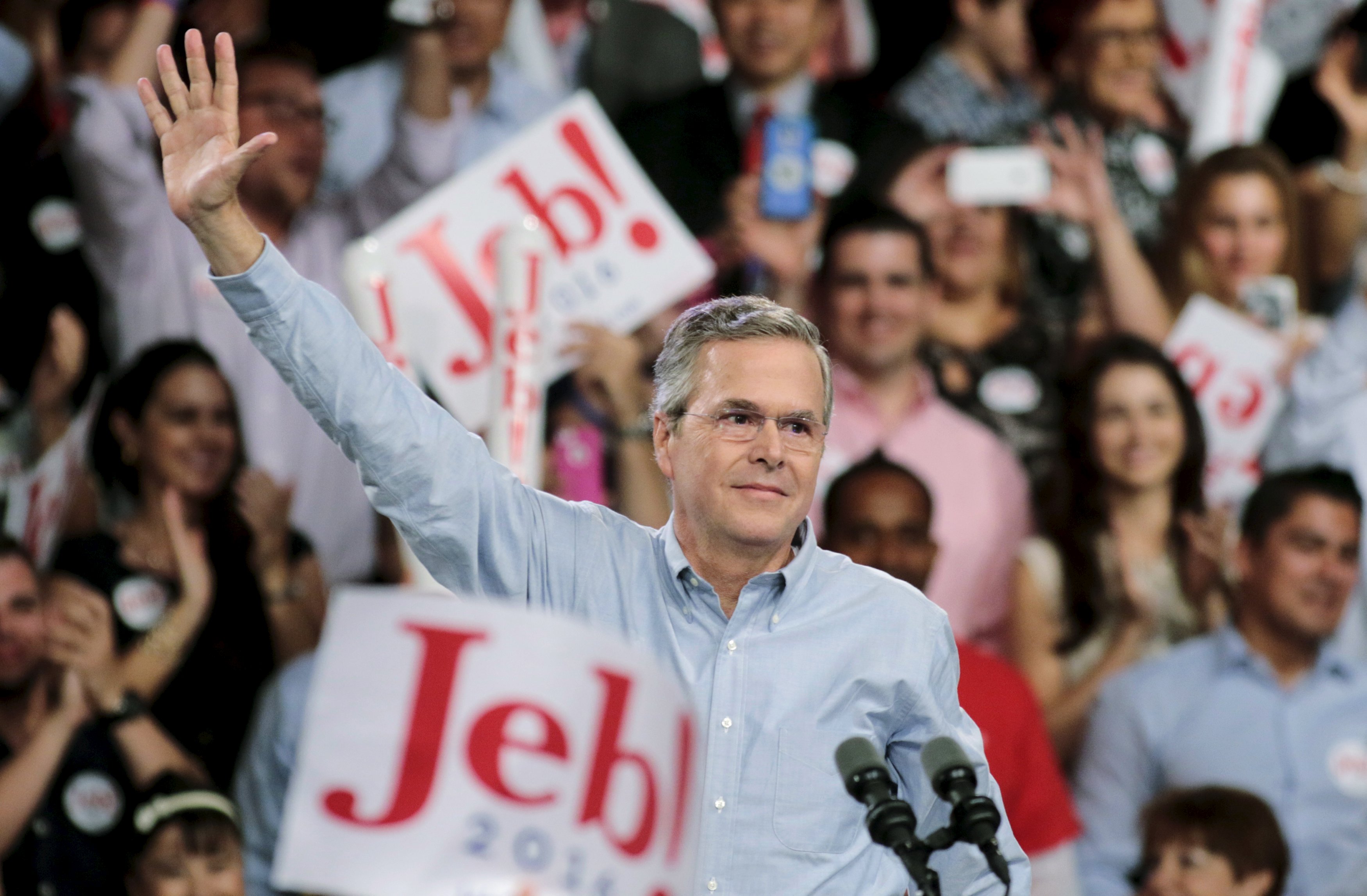 After six months of aggressive fundraising and speaking to voters in early primary states, former Florida Gov. Jeb Bush has finally declared that he is running for president in 2016.

In a speech that leaned heavily on his record as Florida's governor, Bush promised an "optimistic" message. He declared with certainty that he can "Make the decades just ahead in America the greatest time ever to be alive in this world."

Bush is also promising to "take nothing and no one for granted" and run with heart," an attempt to avoid the image of a complacent front-runner. Though he once had commanding poll numbers among the nascent GOP field, he has had increasing competition in recent months from politicians like Wisconsin Gov. Scott Walker and Florida Sen. Marco Rubio.

Still, he will promise to stick to his principles rather than changing his message to suit the political environment.

"I will campaign as I would serve, going everywhere, speaking to everyone, keeping my word, facing the issues without flinching, and staying true to what I believe," Bush said.

Right off the bat, he took an implicit shot at potential opponent Hillary Clinton, accusing the White House of planning "a no-suspense primary for a no-change election."

"They are responsible for the slowest economic recovery ever, the biggest debt increases ever, a massive tax increase on the middle class, the relentless buildup of the regulatory state, and the swift, mindless drawdown of a military that was generations in the making," he said. "I, for one, am not eager to see what another four years would look like under that kind of leadership. The presidency should not be passed on from one liberal to the next."

Later in the speech, he called out Clinton by name when he talked about the "rough years" for religious charities.

"Secretary Clinton insists that when the progressive agenda encounters religious beliefs to the contrary those beliefs, quote, 'have to be changed.' That's what she said, and I guess we should at least thank her for the warning," he said.

The other message of the announcement speech was a pledge to "make opportunity common again," in part by getting "events in the world moving our way again" and taking Washington out "out of the business of causing problems." He said the U.S. economy should be able to grow at a rate of 4 percent a year.

"I know we can fix this. Because I've done it," Bush said. A video playing at the announcement event features Bush discussing his record as governor on spending, education and social issues. That record will be reiterated in more detail during the speech.

"A self-serving attitude can take hold in any capital, just as it once did in Tallahassee. I was a governor who refused to accept that as the normal or right way of conducting the people's business. I will not accept it as the standard in Washington," Bush said. He portrayed himself as a president who would "disrupt the whole culture in our nation's capital."

Bush joins ten other GOP candidates who have already entered the race. Another handful could still join the growing ranks of Republicans vying for the nomination.

At the end of the speech, he spoke about his family, joking that, "In this country of ours, the most improbable things can happen. Take that from a guy who met his first president on the day he was born, and his second on the day he was brought home from the hospital."

Both of those presidents, though -- Presidents George H.W. and George W. Bush, Jeb Bush's father and brother -- were absent from the speech. The last several months have seen Bush attempt to establish an identity as his own man distinct from his famous family members, though it hasn't always been successful.

He spent several days in May stumbling on questions about whether he would have gone through with the 2003 invasion of Iraq given what is known today (about the presence of weapons of mass destruction). After initially responding that he would have, he ultimately switched his position to say he would not have gone into the country.

Bush sought to put the rest any notions that he deserved the presidency because of his family name, saying of himself and his competitors for the GOP nomination, "Not a one of us deserves the job by right of resume, party, seniority, family, or family narrative. It's nobody's turn. It's everybody's test, and it's wide open - exactly as a contest for president should be. The outcome is entirely up to you - the voters. It is entirely up to me to earn the nomination of my party and then to take our case all across this great and diverse nation."

Bush's' mother, Barbara Bush, his sister, Doro Bush and brother Neil Bush attended along with his wife, and his grandchildren.

After talking about meeting his wife, Columbia, in Mexico as a high school student. He joked, "I was ahead of my time in cross-border outreach."

Later, he showed off his fluent Spanish by calling for a welcoming campaign that builds on shared values to expand opportunity and building a better future for the next generation.