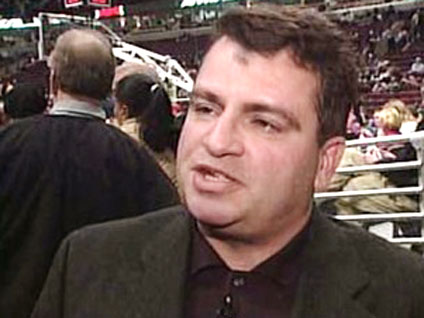 Mariotti, who lives in Los Angeles, was arrested Aug. 21 after police say he pushed and shoved his girlfriend at their apartment in Venice, Calif., reports CBS affiliate WBBM. Officers say the woman appeared to have suffered cuts and bruises in the incident.

Each count carries a maximum of a year in jail.

Mariotti's attorney, Debra Wong Yang, claimed the allegations against her client are "inaccurate and sensationalized" and made accusations against Mariotti's girlfriend saying she was "extremely intoxicated that night and abusive toward Mr. Mariotti."

According to the Los Angeles Times, the couple apparently got into an argument after Mariotti accused his girlfriend of flirting with another man at a Santa Monica club.

The sports columnist, who is known for his candid remarks, quit the Chicago Sun-Times two years ago and went to write for AOL's sports website Fanhouse.com. He is a panelist on the ESPN show "Around the Horn," but has been off the air since the alleged incident.

In an e-mail to The Associated Press, ESPN spokesman Josh Krulewitz stated: "We have no plans to use [Mariotti] at this time."

Mariotti could be sentenced up to seven years behind bars if convicted of the criminal charges.