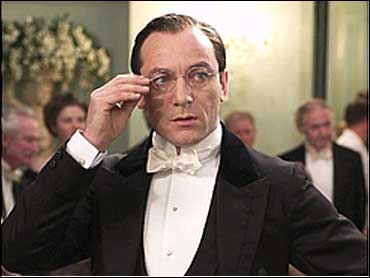 For almost 100 years the story of the Peter Pan, the boy who wouldn't grow up, has enchanted adults and children alike.

This holiday season, Peter and his old nemesis, Captain Hook, are at it again on the big screen. Jason Isaac has a dual role in the film, as Captain Hook and as Mr. Darling, Wendy's father.

Isaacs tells The Early Show co-anchor Julie Chen, "The idea is that it's meant to be subliminal. Neverland is Wendy's nightmare and Captain Hook is this version of her dad that she wishes he was. Her dad is a wimp. Mr. Darling is scared of his own dogs. When you fantasize about what you wish your dad was, you wish he wasn't scared of anything. And in those days, you wished he was a dashing pirate."

As the 100th anniversary of J.M. Barrie's first stage performance of Peter Pan approaches (Dec. 27, 1904), we are due for some insight into this legendary fairy tale and the man who wrote it.

The latest "Peter Pan" is the closest adaptation of Barrie's book to appear on screen. There have been several incarnations, the most well-known being the 1957 Disney animated version about the boy who wouldn't grow up - and the girl whose family insists that she must.

Isaacs notes, "The thing is no one has ever made Peter Pan before, not the real story. No one has put a 12-year-old boy playing the 12-year-old boy so suddenly it becomes this new thing. It's a love story and rights-of-passage thing and all of the elements that have been for the audiences in a hundred years in England (on stage) are there for the first time on film except we've got this magic special effects you can do nowadays so the whole realm of a child's imagination becomes real."

About his portrayal of Capt. Hook, Isaacs says, "I've seen various Hooks before and they're always clowns because he's not a real threat. And J.M. Barrie's Captain Hook is dangerous. He's dangerous because he's real and cornered and he's a wounded animal and he is in pain all the time for his stump. So if he suffers, other people will suffer even more."

Next year, Miramax will release the movie, "Neverland," which focuses on the life of Barrie, portrayed by Johnny Depp.

"Marcia Brady" On Her Drug Use, Paranoia