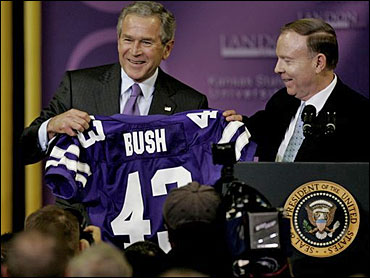 Jarvis left George Washington to take over the Red Storm position and will replace Fran Fraschilla, who departed last month amid controversy after leading the school to its first NCAA Tournament since 1993 this past March.

Various reports claim Jarvis will receive a seven-year deal worth about $735,000 per season. The 53-year-old Jarvis led George Washington to seven postseason appearances, including four trips to the NCAA Tournament and a Sweet 16 appearance in 1993. The Colonials reached the finals of the Atlantic 10 Conference Tournament and finished 24-9 this past season, losing in the first round of the NCAA Tournament to Oklahoma State.

"St. John's is an excellent school, one of the finest instiutions in the country," Jarvis noted. "Not because of the quality of the academics and a rich athletic tradition. I view it as a great institution because of its intense mission to educate the poor. That, probably more than anything else, than players wanting to play in Madison Square Garden, than wanting to learn and grow in New York City... my wife and I were turned on by the mission."

Jarvis turned around a program which had not enjoyed a winning season in seven years. He compiled a 152-90 record and never had a losing season in eight years at George Washington.

"The last eight years have been rewarding," said Jarvis. "I had the opportunity to work with first-class people and wonderful kids. My staff and I are proud of the program we developed."

Jarvis becomes the fifth African-American coach in the 13-team Big East Conference, joining John Thompson (Georgetown), Leonard Hamilton (Miami), Tommy Amaker (Seton Hall) and Al Skinner (Boston College). It is the second defection by an Atlantic 10 Coach to the Big East in the past two seasons, with Skinner taking the reins at Boston College last season.

Jarvis will be trying to take St. John's to the next level, when it was a perennial powerhouse under legendary coach Lou Carnesecca and reached the Final Four in 1985 and missed the NCAA Tournament just twice in a 17-year span from 1976-93.

St. John's loses its top two scorers -- forward Zendon Hamilton and guard Felipe Lopez -- from its 22-10 squad. The duo combined for 32.8 points per game, but Jarvis will have swingman Ron Artest, who averagd 11.6 points and 6.3 rebounds as a freshman.

The hiring of Jarvis was expected for several days, but Newsday (New York) reported today that the negotiations slowed over a behavior clause. St. John's, apparently embarrassed by alleged off-color actions by Fraschilla, reportedly wanted to include clauses allowing the school to fire Jarvis should he violate them.

Jarvis previously served as the head coach at Boston University for five years and guided the Terriers to three postseason appearances. In five years, Jarvis was the school's all-time winningest coach with a 101-51 record.