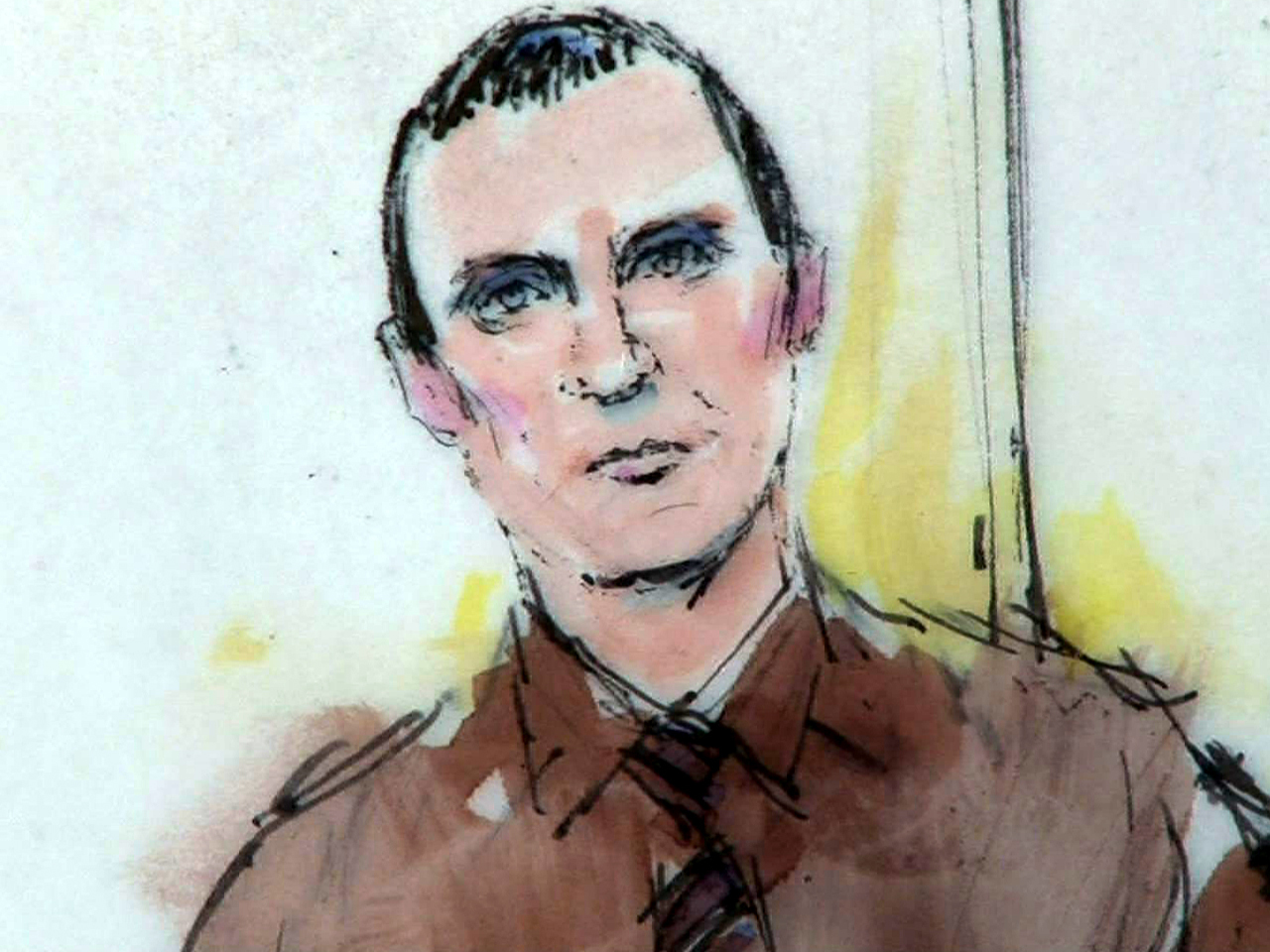 TUCSON, Ariz. The man who killed six people and wounded 13 others in an Arizona shooting rampage was sentenced Thursday to seven consecutive life terms, followed by 140 years in prison.

Jared Lee Loughner pleaded guilty three months ago to 19 federal charges under an agreement that guaranteed he would spend the rest of his life in prison without the possibility of parole.

The deal called for the dismissal of 30 other charges from the January 2011 attack at a political event for then-Rep. Gabrielle Giffords outside a Tucson, Ariz., grocery store.

The 24-year-old entered the courtroom of U.S. District Judge Larry Burns shackled and wearing a brown striped shirt instead of a prisoner's uniform, CBS News correspondent John Blackstone reports from inside the courthouse.

Unlike his booking photos that showed him with a bald head, Loughner had a short haircut in court Thursday.

"Yes, sir," Loughner said in a soft voice when Burns asked if it was true that he wouldn't make a statement, Blackstone reports.

Some of Loughner's victims did address the court, at times speaking directly to him.

With Giffords by the side of her husband, Mark Kelly, the former astronaut told the court that her ability to speak has largely been taken from her, that she's blind in one eye and that she struggles to walk, Blackstone reports.

"Her life has been forever changed. Plans she had for our family and her career have been immeasurably altered," Kelly said. "Every day is a continuous stuggle to do those things she once was so good at."

Loughner showed no emotion, and looked at the other victims. His mother sobbed nearby.

"Mr. Loughner, you may have put a bullet through her head but you haven't put a dent in her spirit and her commitment to make the world a better place," Kelly said.

Kelly also criticized Arizona Gov. Jan Brewer and legislators for not enacting tighter gun control laws in the wake of the shooting.

Giffords kissed Kelly when he was done. He grabbed her hand and they walked away, with her limping.

Suzi Hileman, who was shot while trying to save 9-year-old Christina Taylor Green, also directly addressed Loughner in court.

"I have wanted to take you by the shoulders and shake you, but it wouldn't do any good," Hileman told Loughner.

Patricia Maisch, who helped disarm Loughner, told the court that Green deserved justice and Loughner needed to know every day he wakes up why he is in prison, Blackstone reports.

Both sides reached the plea deal after a judge declared that Loughner was able to understand the charges against him. After the shooting, he was diagnosed with schizophrenia and underwent forcible psychotropic drug treatments.

Some victims, including Giffords, welcomed the deal as a way to move on. It spared victims and their families from having to go through a potentially lengthy and traumatic trial and locks up the defendant for life.

Officials at Pima Community College had suspended Loughner over safety concerns after his classroom disruptions. They told him that if he wanted to return, he would have to get a mental health clearance. Loughner withdrew.

Christina Pietz, the court-appointed psychologist who treated Loughner, had warned that although Loughner was competent to plead guilty, he remained severely mentally ill and his condition could deteriorate under the stress of a trial.

In a press conference after the sentencing, victims and witnesses of the shooting recalled the horror of that day and talked about moving on. Several called on officials to do more about gun control and psychiatric treatment.

"I've been reflecting a lot on what else we can learn from that day," said former Giffords aide Rep. Ron Barber, who was wounded in the shooting. "I believe we have to renew and expand our efforts to increase awareness about system and prevention and treatment of mental illness."

When Loughner first arrived at a Missouri prison facility for treatment, he was convinced Giffords was dead, even though he was shown a video of the shooting. He eventually realized she was alive after he was medicated.

"This is sad. This is tragic. This young man was treatable," he said in a press conference after the shooting. "This state has cut back in mental health ... This is security and we need to take care of ourselves."

Barber and others noted that most mentally ill people are not violent and are more likely to be victims of crime rather than perpetrators -- but preventive action needs to be taken against those who pose a threat.

Pima County prosecutors, who have discretion on whether to seek the death penalty against Loughner, said they will not file state charges against him.

While many of the victims said their hearts were heavy with sadness, they said they did not feel anger toward Loughner or his parents. Daniel Hernandez, an intern to Giffords credited with helping to saving her life, said he was proud that justice was achieved without having "to resort to something as the death penalty."

"An eye for an eye makes the whole world blind," Hernandez said.

Authorities said they will return Loughner to the Missouri prison facility, but it's up to federal prison officials whether he will remain there.

Legal experts had predicted that the only viable defense for Loughner was an insanity defense, given the number of witnesses and video surveillance footage. Still, Loughner never mounted such a defense.

Burns said Loughner did not have an insanity case because the evidence indicated he was aware of his actions and knew they were wrong. In fact, the judge noted, an examination of Loughner's computer showed the 24-year-old had researched Giffords and the federal death penalty beforehand.

"It would not have washed," the judge said.

Loughner planned the attacks by getting a gun, high-capacity pistol magazine and ear plugs and lying in wait for Giffords at the grocery store, Burns said. Among those killed was another federal judge, John Roll.

Mavy Stoddard, who was shot three times and cradled her dying husband, 76-year-old Dorwin Stoddard, in her arms as he lay bleeding after shielding her from gunfire, was among those who spoke to Loughner.

"You took away my life, my love and my reason for living," Stoddard said.

"I am so lonesome, hate living without him," she said, her voice cracking. Staring down at Loughner, she said, "we will never let you win. You will not take our spirit."