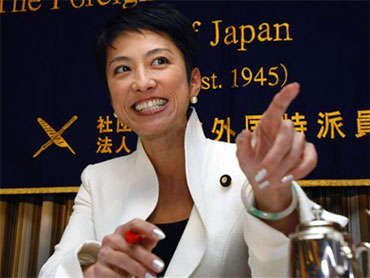 The candidate is young, female and half-Taiwanese - perhaps not the best recipe for political success in Japan, where ancestry matters and women are accustomed to a back seat. Yet the former TV personality known to all as Renho has become the boost the ruling party needs for next month's parliamentary election.

Her Democratic Party swept to power last year, ousting the long-ruling conservatives and promising to reverse a chronic economic and social malaise. But the Democrats quickly ran into ethical issues and a dispute over relocating a U.S. military base that forced a change of prime minister. A poor showing in the upper house election on July 11 would hamper their push for reforms.

Campaigning for the elections opens Thursday, and Renho - she goes by one name - is fighting to keep hers - not that anyone expects her to lose.

Last fall she won a reputation for toughness by grilling bureaucrats during televised showdowns over government-funded programs seen as money-wasters.

When new Prime Minister Naoto Kan named his Cabinet this month, he chose her to lead the fat-cutting battle as his minister of administrative reforms. It was an unusual honor for someone with only six years' experience as a lawmaker. She also is the youngest in a Cabinet where the average age is 59.

"She is the cheerleader for the Kan Cabinet," said Takehiko Yamamoto, international politics professor at Waseda University.

Renho's office said she was too busy campaigning to give an interview.

Born Hsieh Lien-fang to a Japanese mother and Taiwanese father, Renho took Japanese citizenship in 1985 while in high school.

"As a child, I was raised to speak up and voice my opinion," she wrote in her latest book.

At 20, while at college in Tokyo, she won a contract to model in ads for the audio company Clarion. Then she appeared on TV variety shows and became a talk show host and newscaster. In 1995 she moved to Beijing to study Chinese, and was elected to the upper house in 2004.

The mother of teenage twins - a daughter and a son - she is married to a Japanese surnamed Murata, and Renho is the Japanese version of her first name. Her hallmarks are white jackets and short, stylishly coifed hair.

The Democrats' ouster of the Liberal Democratic Party in September was heralded as Japan's political revolution, but the new rulers soon ran into trouble. Yukio Hatoyama, who led the party to victory, had to quit as prime minister this month over a money scandal and a diplomatic dispute with the U.S., and the party's No. 2 official also resigned over funding questions.

So with polls indicating that voters are unsure whether the party deserves another sweeping mandate, the Democrats are happy to have Renho step into the spotlight.

The Democrats control the more powerful lower house of Japan's parliament, so the upper house election doesn't threaten their grip on power. But they need an outright majority to get their reforms legislated.

Her Taiwanese background troubled opposition lawmaker Takeo Hiranuma, an arch-conservative who grumbled earlier this year: "I don't want to say this, but she is not originally Japanese."

But her outsider image appeals to voters, and her role as a mother makes her unusual in Japan's political or corporate worlds. She keeps her more than 135,000 Twitter followers abreast of her views on politics as well as news about her children and dog.

"Correcting wasteful use of tax money is our top priority," said one recent tweet.

"I just found gym clothes balled up in my son's school bag. Why so dirty? I wonder what happened in the P.E. class," said another tweet.

She is determined to confound those who say she is just the Democrats' pretty face.

"I resent the role of presenting bouquets or joining in the line at ribbon-cutting ceremonies just because I'm a woman," she has said.