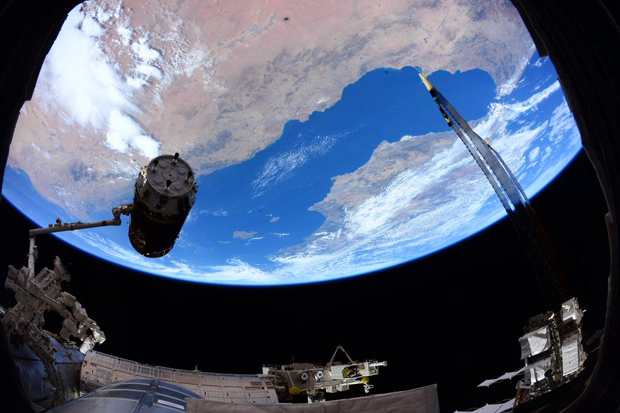 Completing a five-day rendezvous that began with launch last Wednesday, a Japanese cargo ship loaded with 4.5 tons of much-needed supplies and equipment pulled up to the International Space Station early Monday and then stood by while Japanese astronaut Kimiya Yui, operating the lab's robot arm, locked onto a grapple fixture.

Flight controllers at the Johnson Space Center in Houston then took over remote control of the arm as planned and pulled the HTV-5 "Kounotori," or White Stork, supply ship in for berthing at the Earth-facing port of the forward Harmony module.

Once the HTV was properly positioned, astronaut Scott Kelly commanded motorized bolts in the common berthing mechanism to drive home and at 10:22 a.m. EDT (GMT-4), the attachment process was complete.

If all goes well, the astronauts will open hatches and enter the HTV's pressurized cargo compartment Tuesday to begin moving supplies and equipment into the station. Equipment mounted in the spacecraft's unpressurized hold will be pulled out by the lab's robot arm later.

Resupply missions are the lifeblood of the space station but the HTV's successful launch, rendezvous and berthing were especially important because of back-to-back Russian and U.S. launch failures in April and June that destroyed more than 10,000 pounds of station-bound cargo.

The Russians successfully launched a Progress supply ship last month and the HTV-5's arrival will boost the lab's reserves to more comfortable margins while bringing a variety of needed research equipment to the station along with a galley for the U.S. segment of the outpost.

The cargo includes 3,101 pounds of crew supplies, including food, clothing and water, 1,915 pounds of vehicle hardware, 2,753 pounds of research gear, including an experiment rack and an external cosmic ray sensor, 119 pounds of computer hardware and 172 pounds of spacewalk equipment.

Included in the research complement were six samples of alcoholic spirits provided by the Japanese distiller Suntory. But the beverages will not be consumed aboard the station. Instead, the samples will stored and returned to Earth in one to two years to find out how gravity, or the absence thereof, affects the spirits' aging and "mellowness."

Also on board the HTV: equipment that was added in the wake of the June SpaceX failure, including two filtration beds for the station's water recycling system, a control and pump assembly for urine processing, a respiratory medical pack and spacewalk support equipment.

With the cargo ship safely berthed, Kelly and his two Soyuz TMA-16M crewmates -- Gennady Padalka and Mikhail Kornienko -- will set their sites on moving their ferry craft, which carried them into orbit last March, from one docking port to another early Friday. The move is needed to clear the way for launch and docking of another three-man crew early next month.

Padalka, Kornienko and Kelly plan to strap into their Soyuz and undock from the station's upper Poisk module at 3:12 a.m. Friday, pulling away and re-docking at the aft port of the Zvezda command module about 25 minutes later.

If all goes well, the Soyuz TMA-18M spacecraft carrying commander Sergey Volkov, European Space Agency astronaut Andreas Mogensen and Kazakh cosmonaut Aidyn Aimbetov will blast off Sept. 2 from the Baikonur Cosmodrome in Kazakhstan and dock at the Poisk module about six hours later.

Mogensen and Aimbetov will return to Earth with Padalka in the Soyuz TMA-16M spacecraft on Sept. 11 U.S. time. Volkov will remain on board the station and bring Kelly and Kornienko back to Earth in early March after a nearly one-year mission.