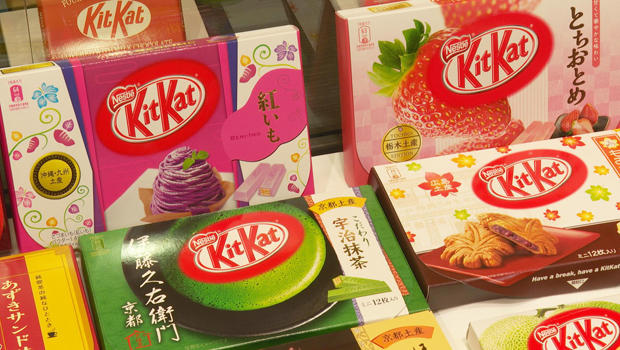 “Kitto Katto” is more than just the Japanese name for the candy we all know as Kit Kat. Mo Rocca tells us it’s more like Japan’s national obsession:

And the mastermind behind these $5 Kit Kat confections is pastry chef Yasumasa Takagi.

“In general,” chef Takagi says, “the Japanese prefer mild flavors, rather than aggressive flavors that hit you over the head.”

You might call its popularity here a case of Kit Kat Kismet. Kitto katto, the Japanese pronunciation of Kit Kat, sounds an awful lot like kitto katsu, which in Japanese means “You surely will win!”

Which explains why, for Japanese students during the high-pressure exam season, the kitto katto has become a kind of edible talisman.

“When it was discovered that the name meant surely you will win, then the company shrewdly decided to capitalize on that?” Rocca asked.

“Absolutely, absolutely,” replied Lacroix. “And it became part of the company mission to play this lucky charm. So Kit Kat’s mission in Japan is really to encourage people.”

AND to sell some not-so-mildly flavored Kit Kats to tourists. Anyone in the mood for a purple sweet potato Kit Kat? Or a bite of a refreshing apple Kit Kat? Or perhaps you’d like to spice things up with a wasabi Kit Kat?

Hey, go easy on that sake Kit Kat! “It really does taste like sake,” said Rocca.

“We appeal more and more to foreigners because they have read on Facebook or social media that the Japanese Kit Kat was fantastic,” Lacroix said. “So when they come here, they want to taste.”

Back in his patisserie, chef Takagi indulged Rocca as they went about creating a new premium Kit Kat. “I know it sounds crazy, but could we mix the the pistachio with the raspberry?” Rocca asked.

“The color will probably be ghastly, but it smells good, doesn’t it?” Takagi said. As he mixed the confection, the chef said, “The color is awful, isn’t it?”

But he offered a taste to Rocca, who approved. “It’s very good!”

And the chef agreed. “Oishī!” (Japanese for delicious.)

Bono on music, activism and faith

A moveable feast: Taking a tapas bar crawl through Madrid

Up next, recap & links 2016
Thanks for reading CBS NEWS.
Create your free account or log in
for more features.
View CBS News In
CBS News App Open
Chrome Safari Continue
Be the first to know
Get browser notifications for breaking news, live events, and exclusive reporting.