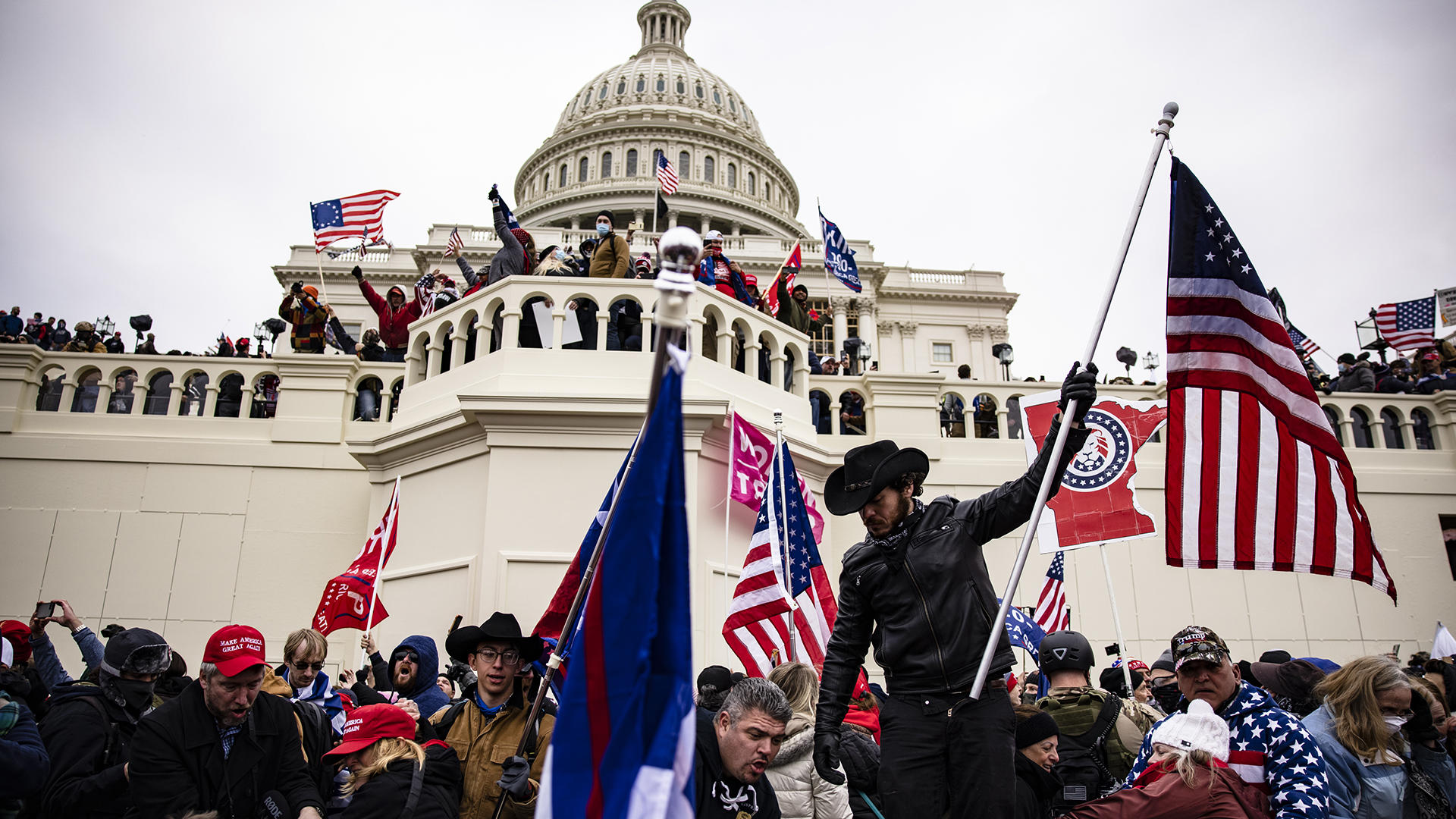 "They came well-prepared and coordinated. This was no less than a coordinated, violent attack on the United States Capitol," former chief of Capitol Police Steven Sund told 60 Minutes correspondent Bill Whitaker.

Airing a week and a half after the assault, Whitaker's report detailed what happened on the afternoon of January 6th and described how law enforcement failed to secure the Capitol. It was one of numerous 60 Minutes reports to examine the historic insurrection, what led up to it, and its aftermath. Here are some of those reports.

The false allegation of a stolen election

Many of President Trump's supporters were incited to invade the Capitol based on their belief in the former president's false allegation that the 2020 election was stolen.

Immediately after the election in November 2020, Mr. Trump began perpetuating a widely debunked claim that there had been widespread fraud in the vote tallying. One of the states he took aim at was Pennsylvania, where Joe Biden ultimately won by a 1.17% margin.

With hundreds of thousands of votes still to count the day after the election, Mr. Trump tweeted he had won the state. His campaign and party then started filing lawsuits claiming voting irregularities and fraud, including in Philadelphia.

That Sunday on 60 Minutes, Bill Whitaker reported from the state and spoke with the people responsible for counting the vote.

"In the birthplace of our republic, counting votes is not a bad thing," said Al Schmidt, one of three commissioners who ran elections in Philadelphia and the lone Republican. "Counting votes cast on or before Election Day by eligible voters is not corruption. It is not cheating. It is democracy."

Among the destruction at the Capitol during the January 6th siege, rioters broke into House Speaker Nancy Pelosi's suite of offices, where, among other damage, they smashed glass and stole a computer.

On 60 Minutes the Sunday after the attack, Speaker Pelosi spoke with correspondent Lesley Stahl.

"The person that's running the executive branch is a deranged, unhinged, dangerous president of the United States," Pelosi told Stahl.

Pelosi explained she was concerned that, in the days leading up to the inauguration, Mr. Trump would try to do something reckless militarily, including ordering the use of nuclear weapons. The Speaker said she had sought advice from General Mark Milley, chairman of the Joint Chiefs, and had called Vice President Pence to urge him to invoke the 25th Amendment, which provides procedures to remove a president from office. Instead, Pelosi said Pence's staff kept her on hold for 20 minutes and never returned the call.

"I like the 25th Amendment because it gets rid of [President Trump]. He's out of office," Pelosi told Stahl. "But there is strong support in the Congress for impeaching the president a second time. This president is guilty of inciting insurrection. He has to pay a price for that."

Three days after Pelosi's 60 Minutes interview aired, the House passed an article of impeachment, impeaching Trump a second time. The former president would eventually be acquitted by the Senate again.

Four days before helping to incite the riot at the Capitol, Mr. Trump failed to get the state of Georgia to take away Biden's victory.

In an interview with 60 Minutes correspondent Scott Pelley that aired on January 10, Georgia's top election official, Secretary of State Brad Raffensperger, detailed an hour-long phone call he had with Mr. Trump, in which he said the former president lied and threatened him.

In the call, Mr. Trump told Raffensperger he needed to find 11,480 votes — one more vote than Biden's winning margin in the state. Raffensperger, a lifelong Republican who voted for Trump and contributed to his campaign, would not choose loyalty over duty.

"I believe I said, 'Well, Mr. President, the challenge that you have is that you have bad data," Raffensperger told 60 Minutes. "Our data shows that you did not win the race. Because we have the facts, and the facts are on our side.'"

In the report, Pelley also spoke with Gabriel Sterling, the chief operating officer for the Georgia secretary of state. Sterling debunked a selectively edited surveillance video that Trump and his lawyer, Rudy Giuliani, had used as evidence of voting fraud.

"From my point of view, they intentionally misled the state senators, the people of Georgia, and the people of the United States about this to cause this conspiracy theory to keep going and keep the disinformation going, which has caused this environment that we're seeing today," Sterling said.

Ensuring safety at the inauguration

The U.S. Constitution mandates that the president be sworn in at noon on January 20. In 2021, that date fell exactly two weeks after an angry mob attacked the scaffolding at the Capitol that was set up in preparation of the inauguration.

On the Sunday before Joe Biden took the oath of office, Scott Pelley reported on the efforts to ensure the peaceful transition of power.

At the time, Inauguration Day security was facing unprecedented chaos. Mr. Trump had fired his defense secretary shortly after the election. Both the attorney general and director of Homeland Security had recently resigned. Even Homeland Security Deputy Secretary Ken Cuccinelli was in an "acting" capacity, and not Senate-confirmed.

Adding to the chaos at the top, the Department of Homeland Security had six secretaries in four years.

In an interview with Cuccinelli, Pelley asked why the American should people have confidence in federal law enforcement when the leadership was not in place.

"Because the professionals we have in law enforcement in the federal government, in the Secret Service and across the Department of Homeland Security and beyond, DOJ and all the rest that we work with, are lifelong, career professionals," Cuccinelli said. "That's 99.9% of the people creating and executing the plans to ensure the safety of incoming President-elect Biden and none of them are going anywhere."

Two and a half months after the assault on the Capitol, federal prosecutors were undertaking the largest criminal investigation in U.S. history — finding those responsible for the insurrection. In March 2021, Scott Pelley interviewed Michael Sherwin, the acting U.S. attorney for the District of Columbia who had been leading the nationwide dragnet.

At the time, Sherwin's office had brought charges against more than 400 defendants. As Pelley reported, more than 100 of those arrests had been made prior to the inauguration.

Sherwin told Pelley his investigators were also looking into the role Mr. Trump played in inciting the attack.

"It's unequivocal that Trump was the magnet that brought the people to DC on the 6th. Now the question is, is he criminally culpable for everything that happened during the siege, during the breach…" Sherwin said. "We have soccer moms from Ohio that were arrested saying, well, I did this because my president said I had to take back our House. That moves the needle towards that direction. Maybe the president is culpable for those actions. But also, you see in the public record too militia members saying, you know what? We did this because Trump just talks a big game. He's just all talk. We did what he wouldn't do."

The FBI has called the January 6th attack an act of domestic terrorism, and as correspondent Sharyn Alfonsi reported on 60 Minutes in April, one group in particular had caught investigators' attention for their role: the Oath Keepers.

The group is made up of current and former military and law enforcement members, and their name is a reference to the oath they took to defend the U.S. Constitution. The FBI describes them as an anti-government militia movement.

"This country is divided right down the middle," Harworth said. "And you're on one side or the other. People have to realize that when things go crazy, things get a little chaosy around you, you have to be able to take care of yourself, defend yourself, protect your family, those you love. That's part of the Constitution."

Recovering from a mass shooting