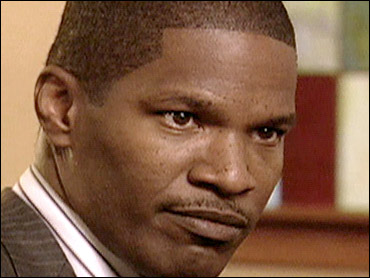 While it's a little early in the game to predict who's going to win this year's Academy Award, it's a pretty safe bet that actor Jamie Foxx, who plays Ray Charles in the movie, "Ray," will be a strong contender. Contributor Ed Gordon reports.

To become Ray Charles, Foxx had to lose 30 pounds to look like him, and have his eyes glued shut to act like him.

"Once I got down to that weight, and when we got the hair together, and I put those shades on, and I listened to that music, I said, 'Watch out. Something is about to happen,'" says Foxx.

But before it could happen, Foxx had to audition for the man himself. "He walks out with that smile. It's right in front of you, that hug that it gives you," recalls Foxx. "And we went straight to the piano."

Foxx only met Charles once, but he says it's all he needed. "That's all I wanted," says Foxx. "Because Ray at that time was in his 70's, and he was older, slowed down. I said, 'I need to know the young Ray.'"

So Foxx got to know the young Ray by listening to a recording of an old television show. "On the cassette tape, it said, 'Hi. This is Dinah Shore from the Dinah Shore Show, here with Mr. Ray Charles,'" recalls Foxx. "And in the back you hear, 'Hello Dinah, I'm just so happy to be here. And I didn't even know that you know my music.' And I would listen to this voice. I'd say, 'Whoa, that's what I needed.'"

Even without his starring role in "Ray," this would have been a banner year for Foxx. He sang on the No. 1 hit, "Slow Jamz," and he co-starred in the blockbuster "Collateral," opposite Tom Cruise.

All this from a guy who, on a dare, first took the stage in a comedy club to do impressions of Bill Cosby and Ronald Reagan. Foxx's big break came in 1991 when he joined the cast of the television show, "In Living Color." Foxx put on a blond wig and lipstick, and the character "Wanda" ("I'm gonna rock your world") was born.

Next came "The Jamie Foxx Show," and it ran for five seasons on WB. There were also HBO specials, in which he took on just about everybody, from O.J. Simpson to Jennifer Lopez.

Foxx, who is so good at pretending to be others, actually began his life as Eric Bishop in Terrell, Texas, a small railroad town where the train tracks still separated the races.

As an infant, he was adopted by his grandparents, Mark and Estelle Talley, a couple already in their 60s who, years earlier, had adopted his biological mother.

Even though money was tight, Estelle insisted that Foxx take piano lessons, and she always found a way to pay for them. "She's at the bow and arrow, she was pullin' that bow back as hard as she could, and aimin' me in a certain direction," says Foxx. "And that when I got to Los Angeles, I would have that self-discipline behind me."

By the time he was 13, he was earning money as music director of the New Hope Baptist Church.

In his hometown, no one doubted Foxx would be a star. He already had his own show at school called "An Afternoon With Eric Bishop." He also starred as the quarterback for his high school football team, the Terrell Tigers. And in football-mad Texas, that's just about as big as you can get.

"The exciting things that happened to me playing football here are just as exciting as what I'm doing in movies and television and music, because those were your first moments of having success," says Foxx.

Why his parents seemed not to care perplexed Foxx, who simply had no idea how to please his father.

"How can you have a son and not wanna be around this type of son? You want your son to play football? I got that. You want your son to be smart? I have that," says Foxx. "And you only lived 26 miles away from me. Those are the things that are hard to come to grips with."

Today, after years of trying, Foxx says he has stopped reaching out to his father. But he says that his relationship with his mother still troubles him. "It's like you keep trying. You keep throwing those lines out there," says Foxx.

But would he give up all of what he's accomplished if his life had been different and he was together with his parents? "No, because I know now as a parent that, in a sense, they copped out," says Foxx. "I don't cop out on my daughter, no matter how busy I am. So you know, I wouldn't do that. Plus, I had somebody who loved me."

His grandmother, Estelle, was there to see him graduate from high school and go to college on a music scholarship. But Foxx soon dropped out to try to break into show business.

But Foxx's humor is not always so innocent. It can be raw, and on occasion, it's drawn fire. The Hollywood Chapter of the NAACP criticized his sitcom for perpetuating racial stereotypes, and Bill Cosby suggested that his movie, "Booty Call," was so crude that it never should have been made.

How upset and hurt was he when his work was criticized as buffoonish?
"When you say buffoonery, it's usually a reference of what will they think of us, and the 'they' is white folks," says Foxx. "So we can't be funny, or we can't poke fun at ourselves, because someone is grading us, or validating us. If I wanna eat fried chicken. If I wanna have a Mercedes with rims on it, and a radio that has a big system in it, that is fine to do all of that. The problem comes when someone dislikes me or disrespects me, because I enjoy that."

Are there jokes that he won't do because it puts black America in a bad light? "You can joke about anything across the board as long as you're smart with it," says Foxx.

And smart he's been. He capitalized on his athletic ability to get a shot as a dramatic actor in the football movie "Any Given Sunday." But when he got a chance to audition for director Oliver Stone, it was a disaster.

"He says, 'Agh. It's not workin' He said, 'You can't read this. You cannot read this. You have to be this. I am not gonna waste one inch of film on you if you sit here and you're doing a monologue,'" recalls Foxx.

He finally convinced Stone to hire him by making a videotape that showed off his football skills -- and the swagger that he could bring to the part of quarterback Willie Beaman. Review after review praised his performance and other parts followed, including a much-acclaimed supporting role in "Ali."

But nothing quite prepared Foxx for the response he's getting to "Ray." What does he have to say about the Oscar buzz over his portrayal of Charles? "You hear it, but you know what? If it doesn't happen, it's fine, because I got a chance to talk to Tom Hanks. I'm in my room, and you hear, 'Hey. Get down to the lobby. It's D.' It's Denzel, and as I'm talkin' to Denzel, I'm turnin' away, and hear, 'Jamie.' It's Al Pacino," says Foxx.

"And it's all these different people saying, you know, 'If it happens, enjoy it. … But at the same time, go back to that body of work. Remain Jamie Foxx, Eric Bishop, that country little boy. Remember all those things, the tracks, everything that allowed you to get to this place.'"