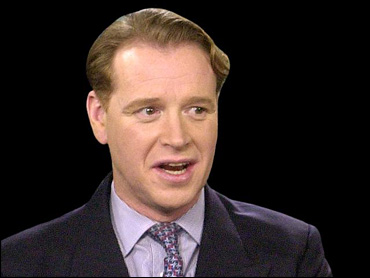 Princess Diana's former lover has sued Fox News for more than $1 million for allegedly breaking a deal to hire him as a war correspondent.

James Hewitt, 44, says in court papers that Fox, after signing him to an $80,000 one-year contract to work for the network, "welched on the deal and then sought to blame Mr. Hewitt in order to excuse their own egregious conduct."

The lawsuit seeks $80,000 in compensatory and $1 million in punitive damages.

Hewitt, a former British army major and take commander, received worldwide attention in 1999 when he published "Love and War," the story of his relationship with Princess Diana and his experiences in the Gulf War.

In December, he was again the subject of publicity - much of it unfavorable - amid reports that he intended to sell love letters that she had written him during the Gulf War.

On Jan. 10, two days after Hewitt appeared on CNN's "Larry King Live," Fox contacted one of Hewitt's lawyers and proposed a correspondent's job from Iraq if war broke out.

The court papers say Fox claimed Hewitt was fired because he violated a secrecy clause and revealed the employment deal. But in fact, say Hewitt's court papers, network officials "were embarrassed by the negative press the leak generated on account of Mr. Hewitt's previous relationship with the late Diana, Princess of Wales."

"The international press picked up the story, and headlines soon appeared ridiculing Fox for hiring Mr. Hewitt as a war correspondent," court papers say. "For example, the story in the (London) Daily Mirror (on Jan. 14, 2003) was headlined, 'Murdoch Hires the Desert Rat.'"